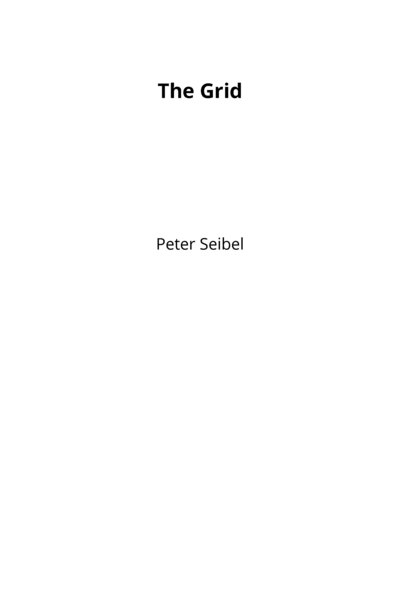 Peter Seibel
Moore's Law has crashed. Peak Oil has hit. Computing is no longer cheap and is controlled by the few. Alan Gregoire spends his days squeezing minute optimizations out of code until an unexpected bug leads him into world of underground hackers bent on changing the system.

It takes place in a near future when Moore’s Law has crashed. The number of transistors that can be fit into a single integrated circuit, and with it the performance of computers per dollar spent, no longer double every two years. By the time The Grid begins, it has stopped growing altogether.

Around the same time as computer performance stopped rising exponentially, energy costs started to. Exacerbated by the ill-timed collapse of Moore’s Law, it was too late to find alternative energy sources. Once Moore’s Law crashed, the cost of developing those technologies started to rise since designing new solar panels or efficient wind turbines required lots of computation and computation was no longer cheap.

Soon it made no sense for anyone but a few companies to run their own computers and computing moved onto the grid. After an intense period of competition all the grid computing powers either merged or died until there was a single Grid, responsible for all the computation that happened on the planet. Users of the Grid have returned to a world of dumb terminals and computers run by a technological priesthood, tending to machines ensconced in air conditioned rooms, inaccessible to the lay public.

Peter Seibel is either a writer turned programmer or programmer turned writer. After picking up an undergraduate degree in English and working briefly as a journalist, he was seduced by the web. In the early ‘90s he hacked Perl for Mother Jones Magazine and Organic Online. He participated in the Java revolution as an early employee at WebLogic and later taught Java programming at UC Berkeley Extension. He is also one of the few second generation Lisp programmers on the planet and was a childhood shareholder in Symbolics, Inc. In 2003 he quit his job as the architect of a Java-based transactional messaging system, planning to hack Lisp for a year. Instead he ended up spending two years writing the Jolt Productivity Award–winning Practical Common Lisp. His most recent non-fiction book is Coders at Work, a collection of Q&A interviews with fifteen notable programmers and computer scientists. He is currently working at Twitter and lives in Berkeley, California, with his wife Lily, daughters Amelia and Tabitha, and dog Mahlanie.