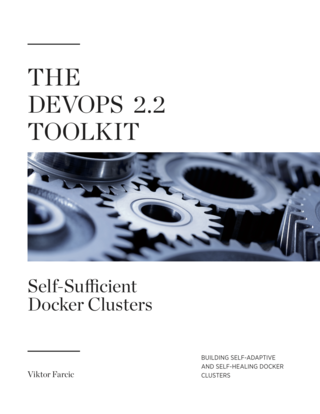 Building a self-adaptive and self-healing system based on Docker

It seems that with each new book the scope gets fuzzier and less precise. When I started writing Test-Driven Java Development the scope of the whole book was done in advance. I had a team working with me. We defined the index and a short description of each chapter. From there on we worked on a schedule as most technical authors do. Then I started writing the second book. The scope was more obscure. I wanted to write about DevOps practices and processes and had only a very broad idea what will be the outcome. I knew that Docker had to be there. I knew that configuration management is a must. Microservices, centralized logging, and a few other practices and tools that I used in my projects were part of the initial scope. For that book, I had no one behind me. There was no team but me, a lot of pizzas, an unknown number of cans of Red Bull, and many sleepless nights. The result is "The DevOps 2.0 Toolkit: Automating the Continuous Deployment Pipeline with Containerized Microservices". With the third book, the initial scope became even more obscure. I started writing without a plan. It was supposed to be about cluster management. After a couple of months of work, I attended DockerCon in Seattle where we were presented with the new Docker Swarm Mode. My immediate reaction was to throw everything I wrote to trash and start over. I did not know what will the book be about except that it must be something about Docker Swarm. I was impressed with the new design. Something about Swarm ended up being "The DevOps 2.1 Toolkit: Docker Swarm: Building, testing, deploying, and monitoring services inside Docker Swarm clusters". While working on it, I decided to make DevOps Toolkit Series. I thought that it would be great to record my experiences from different experiments, and from working with various companies and open source projects. So, naturally, I started thinking and planning the third installment in the series; "The DevOps Toolkit 2."2. The only problem is that, this time, I honestly did not have a clue what will it about. One idea was to do a deep comparison of different schedulers (e.g., Docker Swarm, Kubernetes, and Mesos/Maraton). The another was to explore serverless. Even though it is a terrible name (there are servers, we just don't manage them), it is a great subject. The ideas kept coming, but there was no clear winner. So, I decided not to define the scope. Instead, I defined some general objectives.

The goals I set in front of were to build a self-adaptive and self-healing system based on Docker. When I started writing this book, I did not know how I will do that. There were different bits of practices and tools I've been using, but there was no visible light at the end of the tunnel. Instead of defining what the book will be, I defined what I want to accomplish. You can think of this book as my recording of the journey. I had to explore a lot. I had to adopt some new tools and write some code myself. Think of this book as "Viktor's diary while trying to do stuff."

The objectives are to go beyond a simple setup of a cluster, services, continuous deployment, and all the other things you probably already know. If you don't, read my older books.

Viktor Farcic is a Developer Advocate at CloudBees and a member of the Docker Captains group.

He often speaks at community gatherings and conferences.

An Interview with Viktor Farcic