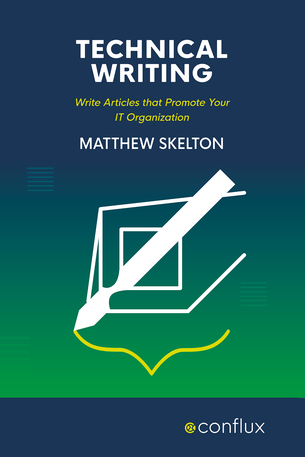 Technical Writing for IT

Technical Writing for IT

Write articles and blog posts that promote your IT organization

Learn how to write informative and readable articles and blog posts about IT. Build your online profile through sharing ideas and information in an accessible way. Showcase your organisation's talents and strengths.

Good quality technical writing can help to attract and retain high-calibre staff and position an organisation as switched on and capable. This book will help you to write engaging blog posts and articles that are interesting for readers and help to promote your organisation as a forward-thinking, skilled place to work.

Matthew Skelton is co-author of Team Topologies: organizing business and technology teams for fast flow. Head of Consulting at Conflux (confluxdigital.net), he specialises in Continuous Delivery, operability and organisation dynamics for software in manufacturing, ecommerce, and online services, including cloud, IoT, and embedded software.

Recognised by TechBeacon in 2018 as one of the top 100 people to follow in DevOps, Matthew curates the well-known DevOps team topologies patterns at devopstopologies.com and is co-author of the books Continuous Delivery with Windows and .NET (O’Reilly, 2016) and Team Guide to Software Operability (Skelton Thatcher Publications, 2016). He is also co-founder at Conflux Books which publishes books for technologists by technologists.

This book is published on Leanpub by Conflux Books