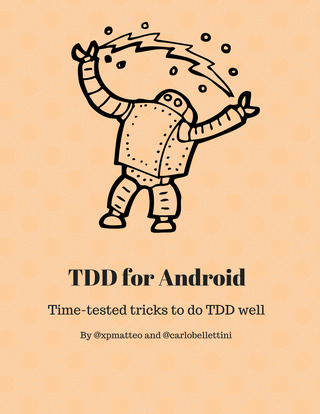 This book is 50% complete

Learn time-tested fundamental TDD and design techniques that make TDD in Android productive and fun. Avoid spending a lot of time tweaking fancy test libraries and difficult IDE/gradle setups. WARNING this book by now is out of date.

WARNING -- this books is out of date. Since the time we wrote it, the Android community caught up with good unit testing techniques such as MVP, and the Android development environment improved so that it's now much easier to run true unit tests. It might still be useful as a reference.

Updating your app frequently and safely... add new features quickly ... sleep well at night... these are the promises of Test-Driven Development. But it's not easy to do TDD in Android. Sometimes it looks like the framework and the testing libraries conspire against you! In this book we'll see how to get a big productivity boost without wasting too much time on complicated testing libraries or frequent reloading of the test code on the device.

We'll see how to write tests effectively, from the point of view of a programmer (not a tester!) We'll see which test to write and which ones not to write. We'll learn age-old techniques of TDD and software design that will help you in mobile development in general, not just with native Android. Above all, we'll learn how to make TDD fun!!!

I've worked through the book as it exists so far and am really impressed! Even as is, it explains the concepts beautifully and the examples build nicely and are non-trivial, yet clearly presented. — Michael Mee

If you are a student, or unemployed, or for some other reason you find it difficult to buy the book, contact the authors. We'll let you have it for free.

Matteo Vaccari is an agile coach specializing in Extreme Programming.  He works for ThoughtWorks in Italy. He enjoys Unix, science fiction and good food.