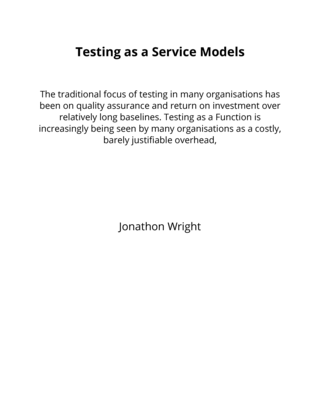 Testing as a Service Models (EuroSTAR)

Testing as a Service Models

The traditional focus of testing in many organisations has been on quality assurance and return on investment over relatively long baselines. Testing as a Function is increasingly being seen by many organisations as a costly, barely justifiable overhead,

Jonathon Wright
The Testing landscape is changing forever, the traditional approach to providing business value through testing is constantly being challenged. So businesses need to constantly re-examine the real value of testing services as an integral part of their overall delivery capabilities. The tendency has been to rely on complex hybrid resourcing models made up of internal resourcing and/or external resourcing (near shore, mid shore and off shore), to strive for Testing Centres of Excellence (TCOE). The question is: are traditional Testing as a Function (TaaF) as part of the Software Development Lifecycle (SDLC) model still valid? Or whether Testing as an Activity (TaaA) needs to develop a Solution Delivery Lifecycle Integration (SDLCi) model to provide business value as part of a Global Testing Marketplace?
$5.00
Minimum price
$9.99
Suggested price

The current economic climate is making companies review their approach to IT even more closely. The same vision could also extend to IT services and particularly testing. Existing technologies of service network virtualisation, business process modelling, cloud based test automation tools and rapid and easy internet access allow for the delivery approaches that allow companies to consume Testing as a Service and pay only for what they use. There is no need to spend large sums on test environments, data masking, test tool selection and maintenance. The use of cloud based services mean you can select the right level of service at a time when you need it and at the volumes you need it whether it is one or one thousand testers on one or many environments, located locally or around the world.

Jonathon Wright has over 15 years of commercial automation experience with a number of international organisations. Jonathon also contributed to the best selling book 'Experiences of Test Automation: Case Studies of Software Test Automation (2012)' and a number of upcoming books on test automation and API testing in the cloud. He is an active blogger on 'Test Automation as a Service' (TaaaS.net) as well as presenting at various international testing conferences (Gartner (London) / STARWest (California) / Fusion (Sydney) / ANZTB (Melbourne) / EuroSTAR (Sweden) / BCS SIGIST (London) to mention a few)." 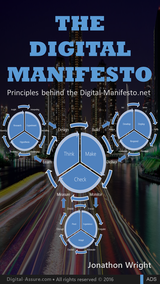