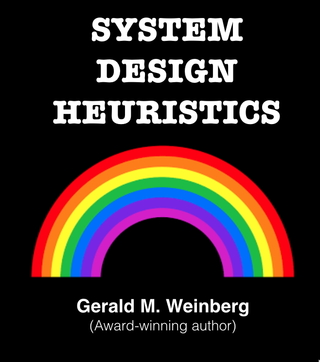 The first part of this book will be devoted to principles: thoughts that apply to design in general.

The second part will provide a collection of heuristics: activities that designers use to help produce better designs and avoid serious design mistakes.

You'd think that after publishing books for half a century, I'd know how to write a book. If that's what you think, you'd be wrong.

Sure, I've even written a book on writing books (Weinberg on Writing, the Fieldstone Method), and I've applied those methods to dozens of successful books. But way back around 1960, I started collecting notes on the process of design, thinking I would shortly gather them into a book. Back then, I didn't call these bits and pieces "fieldstones," but that's what they turned out to be: the pieces that, when assembled properly, would ultimately become my design book.

Building walls from randomly found fieldstones requires patience. So does writing books by the Fieldstone Method. My Introduction to General Systems Thinking took fourteen years to write. But a writer only lives one lifetime, so there's a limit to patience. I'm growing old, and I'm beginning to think that fifty years is as close to "ultimately" as I'm going to get.

So, I've begun to tackle the task of properly assembling my collection of design fieldstones. Unfortunately, it's a much larger collection that I'd ever tackled before. My Mac tells me I have more than 36,000,000 digitized bytes of notes. My filing cabinets told me I had more than twenty-five pounds of paper notes, but I've managed to digitize some of them and discard others, so there's only a bit more than ten pounds left to consider.

For the past couple of years, I've periodically perused these fieldstones and tried to assemble them "properly." I just can't seem to do it. I'm stuck.

Some writers would say I am suffering from "writer's block," but I believe "writer's block" is a myth. I've published three other books in these frustrating years, so I can't be "blocked" as a writer, but just over this specific design book. You can hear me talk more about the Writer's Block myth on YouTube

Why I Was Stuck

Well, that seemed simple enough, but there was a problem. Everybody seemed to know what design is, but nobody seemed able to give a clear, consistent definition that covered all my notes. I finally came to the conclusion that's because "design" is not one thing, but many, many different things.

In the past, I ran a forum (SHAPE: Software as a Human Activity Practiced Effectively) whose members were among the most skilled software professionals in the world. We held a number of threads on the subject, "What is Design?" The result was several hundred pages of brilliant thoughts about design, all of which were correct in some context. But many of them were contradictory.

Some said design was a bottom-up process, but others asserted it was top-down. Still others talked about some kind of sideways process, and there were several of these. Some argued for an intuitive process, but others laid out an algorithmic, step-by-step process. There were many other variations: designs as imagined (intentional designs), designs as implemented, and designs as evolved in the world. All in all, there were simply too many organizing principles—certainly too many to compress into a title, let alone organize an entire book.

After two years of fumbling, I finally came up with an idea that couldn't have been implemented fifty years ago: the book will be composed of a variety of those consulting ideas that have been most helpful to my clients' designers. I will make no attempt (or very little) to organize them, but release them incrementally in an ever-growing ebook titled Design Heuristics.

How to Buy System Design Heuristics

My plan for offering the book is actually an old one, using a new technology. More than a century ago Charles Dickens released many of his immortal novels one chapter at a time in the weekly newspaper. Today, using the internet, I will release System Design Heuristics a single element at a time to subscribing readers.

To subscribe to the book, including all future additions, a reader will make a one time payment. The price will be quite low when the collection is small, but will grow as the collection grows. That way, early subscribers will receive a bargain in compensation for the risk of an unknown future. Hopefully, however, even the small first collection will be worth the price. (If not, there will be a full money-back guarantee.)

Good designs tend to have unexpected benefits. When I first thought of this design, I didn't realize that it would allow readers to contribute ideas that I might incorporate in each new release. Now I aware of that potential benefit, and look forward to it.

Before I upload the first increment of System Design Heuristics, I'll wait a short while for feedback on this idea from my readers. If you'd like to tell me something about the plan, email me or write a comment on this blog.

An Interview with Gerald M. Weinberg