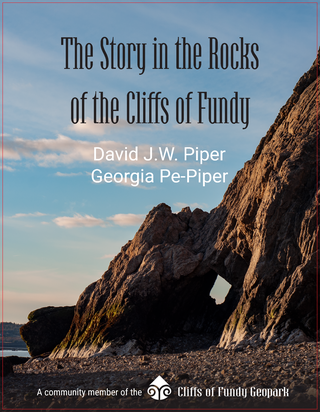 The Story in the Rocks of the Cliffs of Fundy

The Story in the Rocks of the Cliffs of Fundy

An account of the story preserved in rocks of the Cliffs of Fundy Geopark in Nova Scotia, intended for readers with a basic knowledge of geology. It is also an informative synthesis for professional geologists. Find out how granite and basalt cliffs result from the assembly and break up of Pangea, the Ice Age and the highest tides in the world.

The Cliffs of Fundy UNESCO Global Geopark hosts some of the most remarkable geological sites in eastern North America. The Bay of Fundy has the highest tides in the world. Its coastal cliffs preserve a record of the collision of ancient microcontinents to form the Appalachian Mountains and the creation of the supercontinent Pangea in the Late Paleozoic. It also has spectacular cliff exposures of desert sandstones and basalt lava flows that marked the subsequent rifting and breakup of Pangea and the creation of the Atlantic Ocean in the Mesozoic. The indigenous Mi’kmaq tell stories of how the modern landscape was formed by Kluscap and they were the first geologists in the area, mining copper and using amethyst and agate for decoration and tools. Their ancestors hunted along the edge of the retreating ice sheets and adapted to an environmental catastrophe 3500 years ago, when the rising sea level burst into a fertile brackish lake at the head of the Bay of Fundy to create a muddy tidal bay.

This book is intended for the visitor to the Cliffs of Fundy Geopark who has at least a smattering of geological knowledge, perhaps from a course in elementary school; a willingness to cope with some technical terminology; and the curiosity to learn more about the story that the rocks in the Geopark can tell the engaged visitor. The book presents a synopsis of the geological history revealed by the rocks in the Geopark. We have tried to explain in simple terms the way in which geologists use evidence preserved in the rocks to draw conclusions about the history of the Geopark, and more broadly to determine how the Earth works. This book is not a systematic guide to the geosites in the Geopark; rather, it puts the individual geosites into an overall context. Our focus is on rocks in the field, rather than on museum specimens of fossils, which can be seen at the Fundy Geological Museum in Parrsboro and the Joggins UNESCO World Heritage Site. The Geopark is a place where we can learn how earthquakes happen, what goes on beneath an active volcano, how ores of copper, iron and rare-earth elements form. Why are the highest tides in the world found in the Geopark, and what risks do they pose? How does the past record in the rocks inform us about the impacts of global heating and sea level rise? If your curiosity is piqued, then we hope this is the book for you.

The book contains almost sixty original diagrams, maps and photographs to illustrate geological history and processes. It has a glossary and detailed end notes that refer the interested reader to the scientific literature. This pdf version is not printable; if you want a hard copy, one is available from https://fundygeopark.ca/