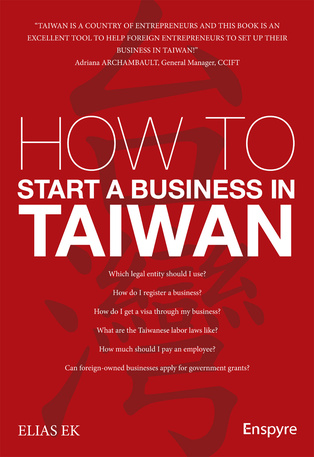 How to Start a Business in Taiwan

How to Start a Business in Taiwan

Elias Ek
This book not only gives the facts and rules, but also include advice and commentary from many people who have done it successfully.
$36.99
Minimum price
$36.99
Suggested price

Taiwan can be a great place to live and run a business.

I hope this book will be a helpful tool for foreign entrepreneurs. Starting a business is always tough. It certainly is not a good way to just get a visa to stay in Taiwan. You have to have a real business plan with real goals and dreams to make it worth the energy, legal hassle and financial investment.

I have spent almost two years researching this book and collecting some great resources, and have tried to provide step-by-step 'how-to' instructions for anyone starting a business in Taiwan. I have tried to address all the important topics and not only give the facts and rules, but also share some advice and commentary from people who have done it.

This book is on Goodreads.

⇒ ★★★★★ "This is an excellent book. One can tell that there is much time, effort and research put into it. This book is basically all a foreigner in Taiwan needs to start a business there. In the book there are Taiwanese business laws, Taiwanese legal issues, immigration issues, basic business, to even Taiwanese business culture. There are charts to help one out, web links to further help out, phone numbers and addresses of places that further help with the business. There is even personal business stories from entrepreneurs to help get an idea of what to expect. One aspect of the book I really liked was the chart with all the banks in Taiwan. It has all the banks listed with their ATM codes to help transfer money from one account to another using an ATM machine. For any foreigner in Taiwan that wants to start a business, I highly recommend this book." - Curtis Chang

⇒ "Taiwan is a country of entrepreneurs, and this book is an excellent tool to help foreign entrepreneurs to set up their business in Taiwan." - Adriana Archambault, General Manager, CCIFT - French Chamber of Commerce in Taiwan

⇒ "Taiwan is a great place to do business...economic freedom, the price and quality of manufactured products is reasonable...geographically being near to China and Korea." - Jake Morrison, Cogini

⇒ "I would love to see the foreign entrepreneur community in Taiwan continue to grow, and this book is a great tool to further cultivate that trend." - Revital Golan, Anemone Ventures

⇒ Review by Klaus Bardenhagen (Taiwanreporter): What to Expect from "How to Start a Business in Taiwan"

⇒ Ebook Profile: How to Start a Business in Taiwan - on Learn Chinese Business

Elias Ek is the co-founder and President of business services company Enspyre which B2B Telemarketing and Phone Answering and services.

He is from Sweden but moved to the US in 1994. Since then he has also lived in Japan, and is since 2000 living in Taiwan.

Elias received a Bachelor in Business Administration in Marketing and a Bachelor of Science in Radio/TV Broadcasting, both from Austin Peay State University, Clarksville, Tennessee. He has also studied at Mid Sweden University in Sundsvall, Sweden and at Kansai Gaidai University in Osaka, Japan.

Already as a 15-year-old, Mr. Ek had the idea to start a company. It didn’t work very well since few adults took a teenage boss for real. At the age of 18 he tried to buy a license for a commercial radio station from the Swedish government, but could not raise enough money.

During his years as a student in the US he co-founded several small internet businesses.

When he came to Taiwan, Mr. Ek and his wife first planned to start a coin laundry company but instead started another internet business instead. They sold this business for a profit before starting Enspyre in 2002.

In 2006 Enspyre organized the first ever seminar for foreigners interested in starting their own business in Taiwan. As co-chair of the European Chamber of Commerce Taipei SME Centre for 3 years Elias helped organize workshops and programs to help foreign entrepreneurs. He is currently active with the French Chamber of Commerce.