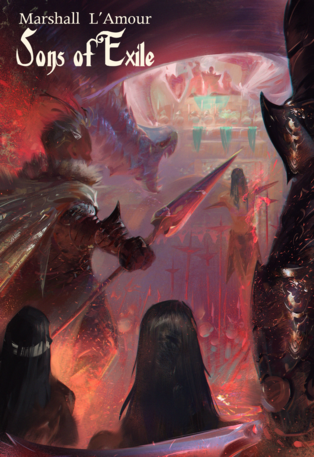 Children of Cataclysm: Book One

This book is 7% complete

The future of an empire is increasingly uncertain. The plights of a bastard prince and a new religion threaten to undermine the very fabric of imperial rule while the Neverliving Emperor becomes increasingly withdrawn from matters of empire. As the powers that be shift in upheaval, unlikely companions become embroiled in the ensuing struggle.

The world of Aeva has been ruled by an immortal emperor for millennia beyond record. His rule has wrought an advanced civilization and a vast and organized army on the backs of his mortal subjects, but the empire remains in a state of perpetual war against the immortal tenants of a paradise long-lost. Meanwhile, the Emperor proves increasingly reticent in matters of empire which fall evermore under the conflicting interests of its clergy and nobility. The destinies of unlikely fellows intertwine in the ensuing upheaval, and they must discover their own roles in an uncertain future.

This is the first book of an epic fantasy and sci-fi saga called, Children of Cataclysm, which will chronicle nine distinct eras of the world of Aeva.  Fashioned as a fantasy, this first entry of the series is set in a period of time greatly contingent upon the sway might and mystery. Most accurately described by what I coin, prohibitive fantasy, it shares more in common with science fiction at its most uncanny but is nonetheless presented in a spirit more befitting of fantasy.

As the first book of the series and the author's debut novel, this book will be highly explorative in terms of style and overall worldbuilding. As a serial, it will be offered as a work-in-progress (or a beta edition) with each installment (3-5 chapters, each) subject to subsequent changes. This series had already undergone over a decade of development before its novelization began, so any of these changes should be minimal. Readers will be kept abreast of any such changes as they develop. At the series' current stage of development, this book will be the first of a planned three trilogies.

A sample comprising the entirety of the first chapter is available on this page, but it is also available through Medium, where commentary on the text is welcome and can be made contextually. That same sample is also currently in progress on Akasha, beginning with the first scene which should be the beginning of my posting material related to this book and the series in general on that particular platform. I'm welcoming criticism and proofreading and am open to vetting alpha-readers to help with each release on either of those platforms but, ideally, on the forum, here.

I have written sporadically in my time but had long published nothing in earnest.  Now I find myself giving literary form to ideas harbored for perhaps the better part of my thirty odd years.  As I pride myself in choosing my reading selections purposefully for what I may retain lifelong, so too do I seek to achieve enduring value in the writing I publish.  While matters of philosophy have long dominated my interests, I have chosen epic narrative as my primary vehicle of expression.  Most of what interests and concerns me as a writer will converge upon the world of Aeva in a trilogy of trilogies, entitled, Children of Cataclysm.

This book is published on Leanpub by Weaponize!Media