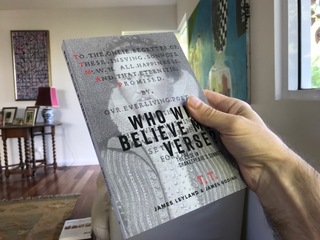 Who will believe my verse?

Who will believe my verse?

The code in Shakespeare's Sonnets

This book is now published by Australian Scholarly Publishing.

The name Henry Neville occurs within the Dedication to the Sonnets and it "maps" to specific sonnet numbers; there are more than 50 examples. The origin of this unusual mapping is the ancient Polybius Square. Remarkably, Neville's own diplomatic codes are also derived from Polybius.

In 2005, Brenda James and William Rubinstein published The Truth Will Out. The book was initiated by James's discovery that the Dedication to Shakespeare's Sonnets was a cryptogram which revealed the name Sir Henry Neville.  James had never heard of him until she made this discovery. We found their evidence and arguments very interesting. However, the book did not reveal any details of the decryption, and we began our own efforts. Our independent decryption strongly supported the idea that the polymath and diplomat Sir Henry Neville was the true author. Moreover, as ambassador to France, Neville had used encryption extensively.

Two years later we made a discovery which seemed to reinforce the evidence for Neville profoundly. This was the consistent mapping between the dedication text and the cryptic sonnets themselves. While we were encouraged that this code relied upon distinctively Shakespearean wordplay, so-called "half-puns", nevertheless we could find no precedent to this mapping approach. For another four years we questioned whether these elusive mappings were wishful thinking, as the code seemed to be unlike any other. But last year we found a clear precedent in the ancient Polybius Square. Even more remarkable was the immediate connection between this code and Sir Henry Neville. Neville’s lifelong friend and mentor Sir Henry Savile was one of two Greek scholars consulted on the translation of Polybius’s Histories, which describes the code.

With the Polybius Square as a common ancestor, the similarity between the code we had decrypted blind and the codes Neville had used 400 years earlier became demonstrably clear.

With over 50 consistent mappings between the dedication and the sonnets, this book provides definitive proof that Sir Henry Neville is the true author of the works of Shakespeare.

James Leyland studied English and Theatre History before training as an actor at the Western Australian Academy of Performing Arts. For several years he worked as an actor, and wrote five plays prior to lecturing in Acting and Theatre History. After completing post-graduate study in Tertiary Teaching he has worked as an instructional designer, facilitator and agile coach. Since 2011, James has been Associate Director of Mezzanine Gallery, a not-for-profit association supporting emerging artists.

James Goding is Emeritus Professor of Experimental Pathology at Monash University. His research interests are Immunology, Biochemistry and Genetics, and have frequently involved the analysis of DNA and protein sequences, which are related via the Genetic Code. He graduated in Medicine in 1971 with the Sophie Davis Gold Medal for the top student in the medical course and the Prince Henry's Prize for the top student in clinical medicine. His PhD studies were with Sir Gustav Nossal at the Walter and Eliza Hall Institute, followed by postdoctoral studies at Stanford University. In 1985 he was appointed Chairman of Pathology and Immunology at Monash University and was the first Monash undergraduate to return to Monash as full professor. Sabbatical at Harvard University 1991. He was President of the Australian Society for Immunology in 1996-8.

This work reveals an astounding mapping between the strange Dedication to Shakespeare’s Sonnets (1609) and the Sonnets themselves. This predictable pattern not only spells out Sir Henry Neville, it illuminates key events in Neville’s biography. This is a poet’s code - worthy of the greatest English writer. If any doubt remains, Leyland and Goding show that this mapping corresponds to the codes used by Neville as Ambassador to France in 1601. Neville's story not only fits, it’s verifiable.

Author of four books on the Shakespeare authorship question.

This book is an astonishing achievement, breathtaking in the brilliance of the discoveries and almost overwhelming. The authors have discovered the most intricate mechanism in literature: the Dedication to Shake-speare’s Sonnets is like an advanced pocket watch. If they were only suggesting coded messages as others have in the past, we might doubt their discoveries but they show there is an intricate mechanism, logical and even mathematical in design. This cannot simply be a result of chance.

2. The life of Sir Henry Neville

4. The Dedication contains a hidden message

5. Mapping the Sonnets to the Dedication