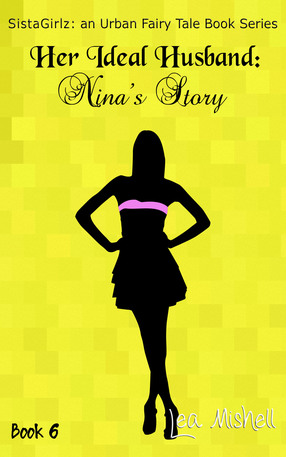 Fun loving and free spirited Nina DeVille was the LAST of the SistaGirlz to WANT to settle down. Hypnotized by the aloofness of her non-committal lover Yusuf Williams, Nina has to decide if "shacking up" is really the way she wants to live her life.

NIna DeVille is a SistaGirl that deeply believes in positively speaking things into existence! She created her own company, traveled the world and freely loved everyone she encountered. Including strong young masculine and just as fiercely independent Yusuf Williams. Haunted by a few skeletons in his closet, Yusuf only wants to love, protect and provide for Nina while keeping his past at bay. Will facing the truth cost him the love of his life? With nothing to offer but the love in his heart, Yusuf tentatively pursues Nina while shielding her from the mistakes of his past. Knowing that Nina would love him without a dime in his pocket, Yusuf's pride pushes him to be the man worthy of Nina's affection.

Author/Editor Lea Mishell was born and raised in the suburbs and more recently seasoned by the CITY of St. Louis, Missouri. In fact, most of Lea's stories are set in her hometown as she likes to "write where I am", as she says. Although she's been writing since the age of 16, a self-proclaimed Professional Procrastinator, Lea didn't publish her first book until after finding her "Things to Do by 30" list and saw "Publish A Book" at the top of the list! Without a storyline in mind, shortly after turning 30 and in less than 3 months, her first book, LIVIN' JUST ENOUGH, was created. Still within the timeframe of her 30th year of life, the book was published and thus launched Ms. Mishell's budding writing career with the release of ILLUSIONS the following year. Ambition pushed her to try a few short stints as a journalist for local St. Louis publications, but Lea soon accepted the truth that her true writing passion lies with fiction as her stories drew from events in her own life.

In 2010, Ms. Mishell contributed her short story "Neva Saw It Comin'" to the book, "Tales From The Lou" written with fellow St. Louis authors Teresa Seals, Mary L. Wilson and Myron A. Winston. In between editing and publishing books of her author friends, Ms. Mishell is currently in writing mode for the double release of UNEXPECTED DETOURS and UNFORGIVABLE, the fourth and fifth books in her SistaGirlz® book series. LIVIN' JUST ENOUGH and ILLUSIONS were re-released in 2012 through Amazon. NEVA SAW IT COMIN' and the "What He Did For Her Love Edition" of LIVIN' JUST ENOUGH were released in 2013 on Leanpub. As of 2015, Ms. Mishell has entered the area of Erotica as well with her "Mistress Harding" series. All available SistaGirlz® and Mistress Harding® ebooks are on Leanpub.

​Branching off into podcasting with her best friends, Ms. Mishell discusses everything she's learned along her free spirit ethically non-monogamous journey.

Ms. Mishell lives in her hometown of St. Louis.

This book is published on Leanpub by Author Lea Mishell