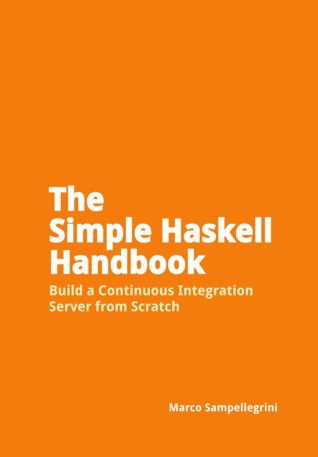 Learn how to build Haskell applications.

A project-driven approach to practical Haskell development. Start from zero lines of code and finish with a working CI Server. Step by step. One type error at a time.

This is the book I wish I had when learning Haskell.

There are a lot of great books out there that teach you the language – but not how to actually build applications with it.

I read many Haskell books. They're great to learn about types, currying, type classes, Functors, Applicatives, Monads… but then what? I felt lost. Many times I just wanted to give up because I couldn't see how I should apply everything that I have learned in a practical way.

It's hard to tell what's considered best practice in the Haskell world. And that makes it difficult to get proficient with the language. That's why this book focuses on Simple Haskell, a subset of the language that I find strikes the right balance between features and ease of use.

In this book, we'll build a Continuous Integration Server. Why such a project? I wanted something serious enough that could pose some real challenges while developing it. No point implementing yet another blog or todo-list or similar toy applications – you're not going to learn much from those.

A CI Server is interesting for a number of reasons. The domain isn't trivial which means we'll have to put some thought into coming up with the right model. The application will have to work with external systems such as Docker containers and Github webhooks so there's plenty of lessons to learn from there.

Here's a brief list of features that Quad CI (our very own CI server!) will support:

We'll get to build all that, from scratch!

This book won't teach you Haskell. I assume you have some understanding of the language, can solve basic exercises and know what IO actions are.

Instead, this book will teach you how to think about problems in a functional language. We won't get things right the first time, there's going to be a lot of refactoring. But that's why Haskell is so good right? Many people praise Haskell for its refactoring capabilities, but very few show precisely what refactoring Haskell code feels like. That's because you need a real project to experience that – you'll see many examples of it throughout the book.

This book is for people that want to move from theory to practice. There's plenty of material on learning the language but very little has been written on architecting applications and the thought process behind it.

Even if you don't plan on using Haskell in your day job, most of the lessons in this book will apply to other languages as well. Embracing Functional Programming will make you a better programmer, no matter the technology.

The full source code for the application is open-source and available on Github: https://github.com/alpacaaa/quad-ci

After many years working with traditional programming languages, I decided I had enough of runtime errors. That's when I started my journey into Functional Programming. I first got into Elm and then, with some more effort, into Haskell. This experience completely changed the way I look at Software development – it really was a better way to build applications.

An Interview with Marco Sampellegrini