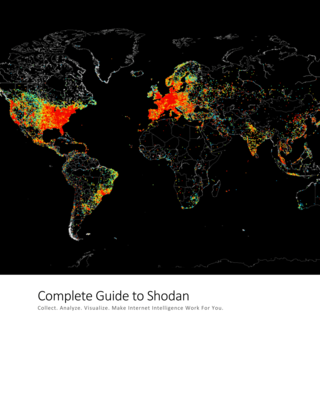 John Matherly
Learn everything there is to know about Shodan from the founder himself. The book covers all aspects from the website through to the developer API with exercises to help test your understanding.
$7.99
Minimum price
$7.99
Suggested price

The Complete Guide to Shodan is the official book written by the founder that explains the ins and outs of the search engine. Readers will be introduced to the variety of websites that are available to access the data, how to automate common tasks using the command-line and create custom solutions using the developer API.

John Matherly is an Internet cartographer, speaker and founder of Shodan, the world’s first search engine for the Internet-connected devices. Born and raised in Switzerland, he attended the Freies Gymnasium in Zurich where he majored in business and law until he moved to the San Diego, USA at the age of 17.

There he worked at the San Diego Supercomputer Center to help manage the world’s foremost protein data bank. At the same time, he was also attending the University of California San Diego’s bioinformatics program which would kindle the fascination with large data and efficient algorithms. His final project included analyzing the human genome for exon code regions and mapping them to proteins while accounting for alternative splicing. After graduating, he worked as a freelance software engineer at a variety of companies including bioinformatics work.

In 2009, his project the Shodan search engine was unveiled on Twitter and within hours the website received a lot of attention due to the unexpected discoveries that people made. Printers, webcams, power plants and more, many of them unprotected or minimally protected, were found over time and the revelations have changed the way security and privacy on the Internet is perceived. Shodan is already seeing TVs, cell phones, traffic lights, industrial controls, infrastructure plants and various home appliances pop-up in the search results. And more of these “Internet of Things” are added each day as the world is becoming more connected. For the past years, he has been featured in the news on CNBC, CNN Money, Bloomberg, Washington Post, Forbes and many others.