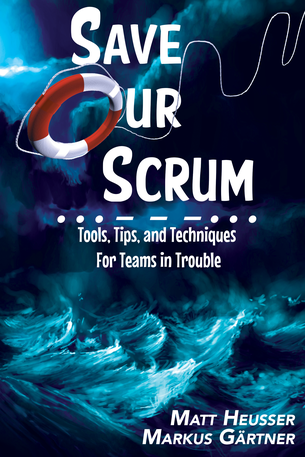 Matt Heusser and Markus Gärtner
Two of the most prolific trainer/do-ers in software development team up to talk about not just how great Scrum is, and how people get it wrong, but how implementations work out -- and how to fix them. Laugh along with Matt and Markus about situations that might be familiar (or cry, it's your choice), then read some concrete advice about how to move forward.
$10.00
Minimum price
$13.00
Suggested price

Scrum may have won the brand-war as the most popular of Agile Methods – but is it working? Or, at least, could it work better?

An opportunity to improve is one way to put it, and that is what Matt Heusser and Markus Gärtner typically see with thier clients.

It's common to see a world where standups become boring status meetings, planning and commitments become command-and-control wishing followed by overtime. Testing stretches past the sprint boundary … and that’s just the beginning.

So let's start over from the beginning - with the current state of Scrum in mind.

Matt and Markus begin with what Scrum is from their point of view, including the problems it tends to solve. They quickly pivot to talk about the forces that conspire to restrict, compromise, and challenge organizations moving toward Scrum, and some solutions.

After that, in part II, the two talk about specific situations they have seen and solutions, in context of real organizations. They call these "nuggets", hopefully gold, or at least coal - consistent, clear and useful.

At least, that's the idea. Right now Part I and Part II are all that is ready - and the graphics need a lot of work. Instead of trying to plan everything up front, the two decided to release this to the world and gather feedback. So please, get the book, then pressure Matt and Markus to finish it.

You'd be doing them a favor.

The principal consultant at Excelon Development, Matt Heusser consults, trains, does, and manages accounts focused on quality in software delivery. Matt was the lead organizer of the Workshop on Technical Debt, the Software Testing World Cup, and a former board member of the Association for Software Testing.  His more recent work is on quality delivery, including improving flow, as well as creating the Lean Software Delivery Series of courses. A certified Scrum Professional, Matt is probably best known as a prolific writer. Learn more about Matt at xndev.com or follow him on twitter @mheusser.

Markus Gärtner works as Organizational Design Consultant, Certified Scrum Trainer (CST) and Agile Coach for it-agile GmbH, Hamburg, Germany. Markus, author of ATDD by Example - A Practical Guide to Acceptance Test-Driven Development, a student of the work of Jerry Weinberg, received the Most Influential Agile Testing Professional Person Award in 2013, and contributes to the Softwerkskammer, the German Software Craftsmanship movement. Markus regularly presents at Agile and testing conferences all over the globe, as well as dedicating himself to writing about agile software development, software craftsmanship, and software testing, foremost in an Agile context. He maintains a personal blog at http://www.shino.de/blog.