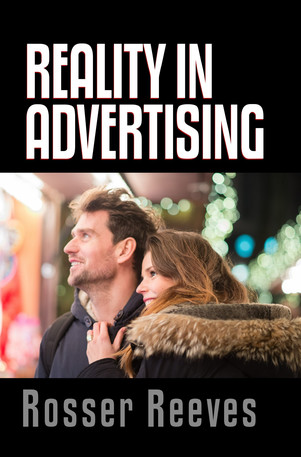 This new, revised edition stays true to the original text while providing additional material which refine his approach in light of modern approaches to copywriting and advertising. Those modern approaches are themselves based on much older successful actions which have been known in marketplaces before recorded history. Just as Reeves built his...

Rarely has a book about advertising created such a commotion as this brilliant account of the principles of successful advertising.

Published in 1961, Reality in Advertising was listed for weeks on the general best-seller lists, and is today acknowledged to be advertising’s greatest classic. It has been translated into twelve languages—French, Japanese, Spanish, Dutch, German, Italian, Portuguese, Danish, Swedish, Norwegian, Finnish, Hebrew—and has been published in twenty-one separate editions in fifteen countries. Leading business executives, and the advertising cognoscenti, hail it as “the best book for professionals that has ever come out of Madison Avenue.”

Rosser Reeves says: “The book attempts to formulate certain theories of advertising, many quite new, and all based on 30 years of intensive research.” These theories, whose value has been proved in the marketplace, all revolve around the central concept that success in selling a product is the key criterion of advertising.

In the course of explaining his own hard-headed approach, Mr. Reeves shows why the ad campaigns for many products are just so much money poured down the drain. He has some devastating things to say about advertising’s misguided men: the “aesthetes” and the “puffers” who put art and technique ahead of the client’s sales; and he punctures many of the misguided philosophies which lower the efficiency of advertising, rather than raising it.

But even more important is the thoroughness and clarity with which he explains many of the mysteries of how to write advertising that produces these sales.

Here, in short, is a concise, forcefully written guide that has been called “a ‘Rosetta Stone’ for the advertising business”—an essential book for anyone who works in advertising, or uses advertising extensively.

It is today required reading in hundreds of great corporations and many of the world’s leading business schools.

(from the original cover)

This new, revised edition stays true to the original text while providing additional material which refine his approach in light of modern approaches to copywriting and advertising. Those modern approaches are themselves based on much older successful actions which have been known in marketplaces before recorded history.

Just as Reeves built his own success on classic authors such as Hopkins, Kennedy, Schwab, Wheeler, Collier and Schwartz.

The shoulders of giants he stood on to see further are being made available to you - as we bring these classic Masters of Marketing into the new publishing formats of ebooks and Print-on-Demand texts.

As well, these books are also being produced as courses, an old medium in a new digital format.

All just so you can climb up and see further yourself.

Scroll Up and Get Your Copy Now.