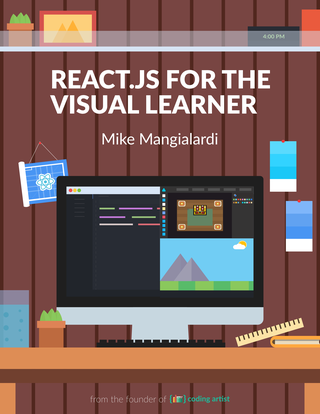 React.js for the Visual Learner

If you want to learn React.js without the fatigue and frustration, this book is for you.

Hey there! I'm Mike Mangialardi and I'm a crash test dummy for designer/developer hybrids. I like to take things that I am learning and put together didactic, practical resources.

If you want to know what this book is about, the short answer is that it's a book I put together as I was learning React.js. It applies design principles, visual-friendly examples, and super practical teaching methodologies to help the absolute beginner to React.js learn the absolute basics of React.js. This book is free to read online but you can pay to support me if you like what I'm doing and get a PDF, EPUB, and MOBI copy.

In December of 2015, I graduated with a degree in Computer Science. Around the same time, I was listening to entrepreneurial podcasts that was ultimately a means by which I gained interest in web development and startup culture.

I set off to get caught up to speed with modern web development so I could land the jobs I wanted. Shortly after, I was flooded with buzz words:

I had no idea where to start but I gave React.js a shot. Long story short, I quickly became fatigued and wanted to give up as a developer.

Months later, I developed a routine of working with designing vector graphics using Affinity Designer for fun and stress relief. Through lots of practice, I got really good at being a vector graphic artist and it helped boost my confidence.

With a newly discovered confidence, I set off to take another stab at React.js. This time around, I started to see a striking similarity between the concepts of React and design principles. I also took an active learning approach where I would write blog posts to retain knowledge of what I was studying.

This book is a collection of chapters that I wrote as I was learning React.js. By the end of the writing process, I feel very confident in my own skills with React and that this book truly teaches absolute beginners the absolute basics of React.

If you want to avoid fatigue and finally learn React.js then this book is meant for you.

Mike created Coding Artist in 2017 to be a central hub for his resources, most notably, the Daily CSS Images Challenge.