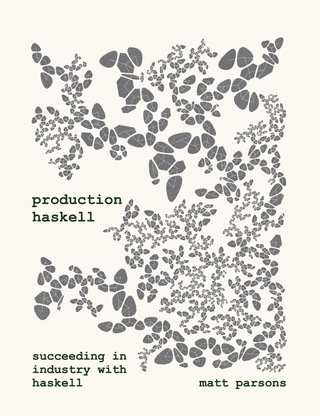 Succeeding in Industry with Haskell

Are you excited about Haskell, but don't know where to begin? Are you thrilled by the technical advantages, but worried about the unknown pitfalls? This book has you covered.

I will be publishing "Production Haskell" via Manning Publications. If you have purchased a copy through Leanpub, please send me an email with your receipt and I will ensure you get access to the book through them.

So you've learned Haskell. You've taught your friends about monads, you've worked through some beginner textbooks, and maybe you've played around with some open source projects. Now that you've had a taste, you want more: you want to write an application in Haskell for fun! Maybe you want to use Haskell at work!

You sit down at your computer, and you're stuck.

How does anyone actually get anything done with this language?

This is a common thing to wonder.

Haskell has always enjoyed a wide variety of high quality learning material for advanced parts of the language, if you're not afraid of academic papers. The last five years have seen an upswelling of fantastic resources for learning the language as a beginner. However, the language does not have many resources for using it in production. It's difficult to navigate the ecosystems and identify quality resources that are in alignment with your goals and values.

This book aims to help with that situation. After reading this book, you should feel comfortable writing large software projects in Haskell, evaluating competing libraries and techniques, and productively reading material from a variety of Haskell users.

Haskell is a hugely diverse landscape.

There are many regional groups: United Kingdom, Scandinavia, mainland Europe, Russia, the USA, Japan, China, and India all have thriving Haskell ecosystems that have interesting dialects and differences in custom and practice.

This book is intended for people that want to write Haskell in industry. The tradeoffs and constraints that industrial programmers face are different from academic or hobbyist programmers. This book will cover not only technical aspects of the Haskell language, but also social and engineering concerns that aren't "really" about Haskell.

Part of this book will be objective. I will teach you how to use some interesting techniques and ideas to make developing with Haskell more productive. We'll learn about Template Haskell, type-level programming, and other fun topics.

However, for the most part, this book is inherently subjective. Because Haskell serves so many ecosystems, it is imperative to discern what ecosystem a something is intended for. More than just giving out prescriptions - "This library is production ready! This is a toy!" - I hope to show my thought process and allow you to make your own judgment calls.

Ultimately, this is a book about the social reality of software engineering in niche languages.

I was extremely fortunate to have these opportunities, as they set me up for success to work with Haskell. My first job out of college was converting PHP applications to greenfield Haskell, and I've been working full-time with Haskell ever since. I've worked in a variety of contexts: a startup that wasn't 100% sold on Haskell, a larger company that was sold on Haskell but wrestling with social and technical difficulties of a huge code base and development team, and a startup that was sold on Haskell and working on growing. I also contribute to many open source projects, and I'm familiar with most of the ecosystems. All told, I have worked with nearly a million lines of Haskell code!

I've seen Haskell fail, and I've seen it succeed. I'd like to help you succeed with Haskell.

Hi! I’m Matt Parsons! I like to ride my bicycle, play guitar, learn cello, and occasionally program a computer. I work as a software engineer for Lumi.

I started learning a software in Spring 2014 in my “intro to Java” course at UGA. JavaScript introduced me to functional programming that summer, and Ruby on Rails pointed me towards Sandi Metz and Smalltalk-inspired object oriented design. Haskell caught my interest and I started learning it in earnest in early 2015. Ever since, I’ve been sold on functional programming.

I tend to like abstraction, patterns, extremes in contrast, and going a little too meta. There’s an underpinning to writing music, learning mathematics, and making beautiful programs that resonate with me. Emergent complexity, chaotic systems, and expressions of passion are my favorite things.

An Interview with Matt Parsons