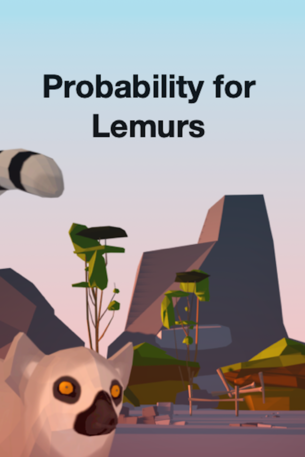 This book is 70% complete

Lemurs can represent approximate numerical values and have numerical rule-making abilities - so the author thought, "Well if a lemur can do that, why can't I do that too?" This book is an attempt at making practical probabilistic concepts much easier to grasp and internalize by tapping into the highly-visual, primitive part of our brains.

The ambition of "Probability for Lemurs," is to communicate probability-based math concepts in an easy to follow visual way - ideally so that lemurs (and perhaps other primates) can understand said concepts and apply them in their daily life.

Since probability is taking such an increasingly important part of our global dialog - whether it’s through talking about how votes are counted, how climate change affects us, or how disease vectors spread, it’s important to be able to have a crystal clear understanding of the math and be able to communicate it easily and succinctly to others.

Previous to the mid-2000s, lemurs were thought to be not quite as smart as their more sophisticated cousins, monkeys, apes and humans. Research at Duke University showed through a series of experiments involving touch-screens and plexiglas boxes holding raisins and buckets hiding grapes and other treats, that lemurs can pass the same types of I.Q. tests as chimps. Lemurs can represent approximate numerical values and have numerical rule-making abilities.

The idea is that a book about probability should ideally be so simple that a lemur could understand it.

Beyond their smartness, Lemurs are critically endangered - in fact they are the most endangered family of mammals on Earth, and it might be nice to give them some more attention. Lemurs come from Madagascar, an island nation off the southeastern coast of Africa hosts at least 12,000 plant species and 700 vertebrate species, 80% to 90% of which are found no where else on earth - among them are lemurs. Almost One-third of all lemur species are critically endangered, which is the next step prior to extinction as of 2020. 98% of lemur species are threatened, which means that they are likely to become endangered in the foreseeable future if they are not already.

Plan for This Book

The author has already posted a lot of content on his twitter over the past couple years, but in the form of rough sketches and using unlicensed images. The idea of putting this on LeanPub is to help pay for licensed images or pay to create nicer-looking vectors of lemurs and bananas and symbols that can be used in the book.

This book was first launched on October 31st, 2021, according to schedule, which included various basic parameter calculations. The next installment was on Pi Day, March 14th, 2022 and included significant additions, including Significance Level, P-Value, Probability Space, Inference, Hypothesis Testing, Chi-Squared Independence Test, t-Test, Binomial Theorem, Bayes' Theorem, Poisson Process, Markov Chains and more. The plan is to have additional installments to finish it up by the end of 2022.

Going forward, it would be nice to figure out a way to donate a portion of the proceeds for this book to a lemur related cause - please contact the author if you have any referrals.

Long-term, the author would like to finish the book with properly licensed content and come out with a physical copy version that includes tabs or indices so it could be a desk companion or a coffee table book. The theme here is making a book that goes over principles and math that comes up a lot in daily life, so working toward a reference guide that one could pull out and have handy would be nice.