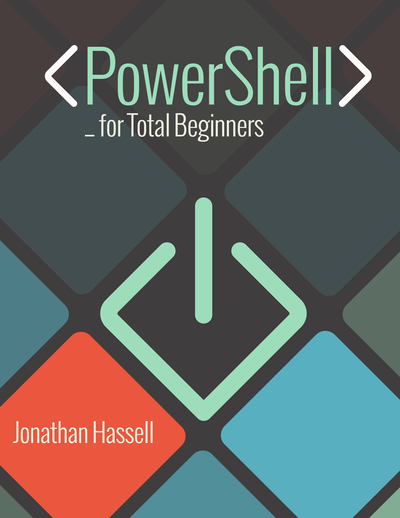 Jonathan Hassell
The only book on the market written for non-developers and total beginners, by a non-developer and one-time total beginner. If you're frustrated by endless jargon, huge logic leaps, and a decent helping of that good old feeling of WTF, but you still want to learn PowerShell, then PowerShell for Total Beginners was written just for you.
$9.99
Minimum price
$15.00
Suggested price

If you don’t know PowerShell, you’re getting left behind.

PowerShell is absolutely everywhere. It’s embedded in Microsoft products. You’ll find it in Exchange, SharePoint, SQL, Skype for Business and Lync, Windows Server itself, and even third party software has jumped on the bandwagon.

In fact, some Microsoft products use PowerShell as their primary management interface. Sometimes there are features to configure or settings to administer that you just can’t get to via the GUI anymore. That’s how far PowerShell has come.

So it’s time to face the bottom line: if you administer or use Windows products from any sort of management perspective, you’re going to use PowerShell at some point. Or you won’t be able to do your job. It’s really that simple.

If you don’t learn PowerShell now, then when?

Hey, I get it. Learning a new scripting language doesn’t pay the bills. You have to put out fires, remove that pesky Cryptolocker malware, increase everyone’s mailbox quota by 10 GB a piece because these damn iPhones take such high resolution pictures, move a bunch of data up to Office 365, make sure everyone’s Dropbox accounts are locked down–and that’s only before lunch.

Learning PowerShell will pay the bills.

Now, I don’t like speaking from a fear perspective. I want you to want to learn PowerShell. I want you to be convinced it’s the best thing since sliced bread. (I don’t know that it is, though, because I really like a good sandwich.)

The issue is, plenty of other people already made up their mind. Hiring managers have. Other employee candidates have. PowerShell experience is a requirement for many–dare I say most–job postings in this new economy. If you want a new system administrator position, or if you want to move up in the ranks to management or grow your experience elsewhere, you have to have PowerShell chops in order to fit in.

And if you’re a consultant or you manage a lot of systems, you are actually costing yourself money by not working in the most efficient way possible. Do you bill by the hour? Do you regularly set up production systems for new clients? Do you have a script that lets you do it in five minutes, or do you sit there manually and take a whole weekend to on-board a new client?

If you can’t do your job without a GUI, you’re at the end of the road.

The GUI is dead. We can have a funeral and lament the good ole days of Remote Desktop to 15 different servers at one time, or we can learn how to move forward with PowerShell. I vote for that.

Trouble is, lots of people never take the time to actually learn PowerShell. Rather, they just start trying to look up commands one at a time. How do you add a mailbox to Exchange? How do you add new users to your network? How can I run the same command on all ten of my domain controllers?

And so they Google and Bing for answers and they find some that are sort of applicable, but don’t fully work in their environments. They run the examples, they fail, the error messages are cryptic, and they give up in frustration. It’s impossible to learn PowerShell by sound bite, after all. And they think to themselves, “who has time to learn this stuff?”

Learning PowerShell is hard. And it’s OK to admit that.

I took the time to ask some folks what their biggest hang-ups with PowerShell were right then and there. I wanted to understand what was holding people back. I got a lot of answers, and I saw some clear themes develop. Some of the most common answers I got looked a lot like the following:

And if you’ve spent only ten or 15 minutes with PowerShell, it’s easy to see how those are your main takeaways from your experience.

But it doesn’t have to be that way.

I can show you how, and why, all of those things are true in my new book and video series.

PowerShell for Total Beginners is my custom built, handcrafted, painstakingly curated book and video series designed to get you from total PowerShell newbie to confident and open PowerShell user in as little as four weeks.

The PowerShell for Total Beginners book I can sum up in one way:

It’s PowerShell as I would like to have learned it.

I’m not a developer. I was a system administrator for a Research I university for a while, I was a SharePoint administrator, and I’ve been covering Microsoft and Windows Server from an IT pro perspective for 16 years now. I saw the importance PowerShell was gaining in the industry and I wanted to learn it.

I wanted to learn it so much, in fact, that I went out and bought basically every beginner resource that I could get my hands on. I bought books that promised I could learn in 24 hours, in a month of hour long sessions, in three weeks, and that I’d know everything at the end. I bought books geared toward idiots because I thought that would be a good place to start.

I’ll be honest with you–every single one of them disappointed me in some way. Every one.

I didn’t learn PowerShell well. I certainly didn’t learn it in 24 hours, or even a month. Sure, I picked up bits and pieces, but the overwhelming feeling I got from these books is that they assumed too much knowledge on my part. They thought I would know what an int32 was. They thought I’d be able to figure out what modules and variables were. And what the hell is a pipe character?

There were some great books for the advanced beginner, but for a guy with no development experience and no prior knowledge of PowerShell, I felt lost.

I know why this is the case. Most programmers are absolutely terrible at teaching programming, and yet programmers are the ones writing the books. These guys and gals are so advanced and so in the dirt, so to speak, that they just cannot empathize with or imagine a complete beginner, a total non-programmer, non-developer wanting to learn anything. And so in their writing and their teaching they make giant leaps and bounds without even realizing it, leaving their students lost and frustrated and on the brink of giving up.

It occurred to me that I certainly couldn’t be the only one who actually was a newbie with zero development or scripting experience who recognized and acknowledged the need to learn PowerShell, but who needed a serious helping hand. So, given the lack of good–well, any as far as I could tell–resources on the market for that demographic, I decided to take action.

I decided to create the book I wanted to learn PowerShell from.

And that’s what PowerShell for Total Beginners is. It’s over 200 pages of PowerShell hand holding. If your grandmother cared anything about learning PowerShell, she could learn it from my book.

Jonathan Hassell is an author and consultant based in Charlotte, North Carolina. He's been writing on Microsoft from an IT pro perspective for over 15 years.