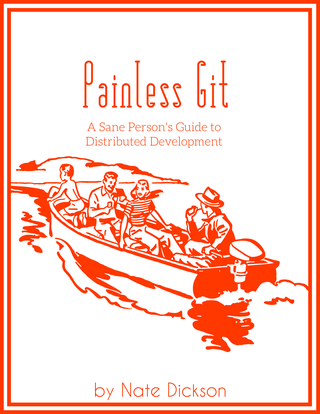 Hello friend. Do you feel like you need to know git, but you don't? Well now you can! Painless Git is all about learning and having a good time doing it.

Git is the lingua franca of team-based software development. And with good reason. Git is powerful, flexible, well-built, and battle hardened.

It can also be just a bit daunting. Merge conflicts pop up and litter your code with random rows of equal signs and angle brackets. You get great advice about rebasing instead of merging, which is a good idea except for those times where it's a bad idea. Stray too far into the weeds and you start hearing about "reflog" which sounds like "hitting someone again". that's no way to live.

Which is why I'm here. I've been teaching teams how to use git for about five years now, and trust me, I've seen every mess a team can get into with git.

Painless Git is a distillation of all the best git advice I've found over the years, helping you not only start using git, but start using it well. Once you've got a solid understanding of the basics of git, I'll help you build the confidence you need to find your way out of messes without resorting to the old "delete your working directory and start over" technique.

The Painless series is designed around developers who have a lot to do. I take it as read that you're intelligent and don't want to spend your time reading tech books. Painless Git is designed to be short, easy to read, and inexpensive, so you can learn how to manage distributed development quickly and get to work. I think you'll like this book and before too long you'll find that using git is actually fun, and learning it was, well, painless.

Nate Dickson, MBA is a scrum master by day, working for a large non-profit organization in the tops of the Rocky Mountains. By night he writes novels, plays games, and contributes to various open source projects. Nate lives in a cozy little suburb with his wife, kids, and a couple of dogs. It's a good life.

An Interview with Nate Dickson