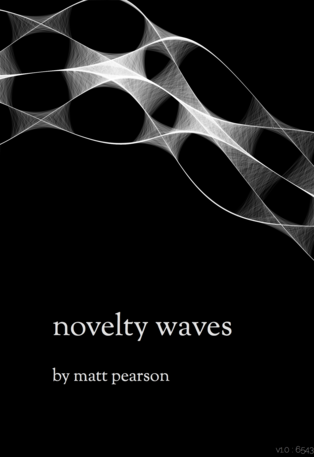 a short book about digital art

Matt Pearson
"When my kids ask me, 'what did you do in the Visual Art Wars dad', I can tell them, with pride, that I fought on the side of the future…”
Table of Contents

"prepare to have your thoughts provoked..." michael marshall smith

OUR ART-FORMS ARE EVOLVING

It’s the second decade of the 21st Century. We’ve made it past the millennium. Past the end of the Mayan calendar. Past the omega point of Terence McKenna’s "timewave zero". The world has spectacularly failed to end or collapse under the weight of its own complexity. We’re still here. We survived. Well done us.

This centrifugal moment has flung us out in a new direction. We’re moving fast but with no clear idea of where we're heading. As a culture we're frantically trying to get our bearings, looking around for familiar reference points that aren’t there any more. Even science fiction, the artform best suited to exploring our possible futures in the past, is now struggling to keep up with the novelty of the present. Q-Branch has given up inventing gadgets for James Bond, unable to compete with the devices in the pocket of every teenager at every bus stop. To mis-quote William Gibson; the future is already here, and it is increasingly evenly distributed.

For the first time in many decades, we have this uninterrupted stretch of time reaching out ahead. There’s no horizon. No doomsday. No end times approaching. We are striding into the 21st Century with fresh confidence, at least until we’ve had time to agree on a new eschatology. Which won't take long I'm sure, as we've never been fond of stories without endings. But, right now, within this transitional moment, we have a unique attitude. And while we hold this pensive breath, it seems the best of our speculative fictions are to be found in the field of digital art.

"… using both fiction and non-fiction, Matt explores the borderline where digital technology meets human thought and flesh, looking for suitable places to cross over, under cover of dark, away from the prying eyes of giant business corporations and governments. He’s alert to the everyday dangers of the latest devices and procedures, as well as the massive potential they hold for needful change. Most of all he’s interested in that moment when a new technology stops being, well, a technology as such, and turns into an actual medium. A medium of expression. … " jeff noon (from his foreword)

Matt Pearson, aka zenbullets, is a writer and coder based in Brighton, UK. His first book Generative Art (Manning 2011), earned critical acclaim and was recently translated for the Japanese market.