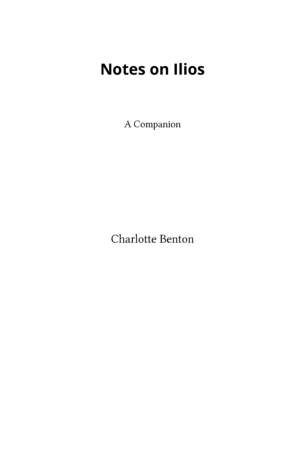 Charlotte Benton
Author's Notes on the inaccuracies, variant versions, and other mythological aspects of Ilios. Because I would feel dishonest if I didn't point out my own inaccuracies, since Ilios was supposed to be "entirely mythologically accurate."
Table of Contents

I have retired this and Ilios because I don't have time to fix up all the problems I've come to be aware of in Ilios, and I don't want anyone else downloading either of them until I do have time.

Chapter-by-chapter notes on Ilios, pointing out all the places where I diverged from the original myths, and explaining many cases where I used lesser-known variations instead of the more standard texts.

Released for free, because how could I possibly ask anyone to pay for something like this?

Unlikely to make the least bit of sense if you haven't read Ilios, however.

I should point out that this is in need of an update.  Mostly because somehow the Achilleis of Statius had somehow slipped under my radar, so I couldn't address it in my notes.  Now that I know about it, I can correct my statement that no ancient author made Lycomedes ignorant of the fact that Achilles was actually a boy, because Statius did, in fact, make Lycomedes ignorant of Achilles' true gender.  (That's probably the biggest change that will be made in the next update, adding that information...)