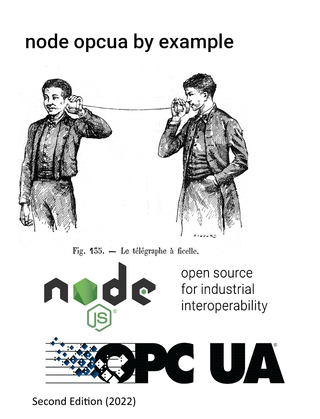 Get the best out of node-opcua through a set of documented examples by the author himself that will allow you to create stunning OPCUA Servers or Clients.

This book is the second edition of "NodeOPCUA by Example". It provides hands-on recipes to best use node-opcua, the OPCUA stack for javascript and typescript.

It is updated and enriched regularly to match the most recent release version of node-opcua.

Node-OPCUA is used worldwide in many industrial applications and is an essential building block for many world-class applications such as  IBM's IIOT Node-red and Amazon Greengrass platforms.

Node-OPCUAis published in open-source (MIT license) on GitHub and has an active community of testers and contributors.

Etienne is the author and designer of Node-OPCUA, the OPCUA framework for nodejs and Founder of Sterfive

Etienne has more than 25 years of experience in software development innovation for the industry in the field of CAD / CAM, dimensional metrology, and machine-to-machine communication and holds a double Master in Science & Technology from “Arts & Metiers”.

Sterfive develops the next generation of open-source software for the industry. It specializes in the communication of industrial objects thanks to the OPCUA interoperability standard.

Sterfive is exclusively funding its open-source R & D thanks to the support of its sponsors who are industrial users of Node-OPCUA.

Sterfive offers expertise, assistance, and support services to its industrial customers who want to implement Node-OPCUA in the best conditions in their applications.

Sterfive also develops custom software for its customers such as dedicated OPCUA embedded servers and aggregators. Sterfive is a Corporate Member of the OPCUA Foundation and a UMATI Partner