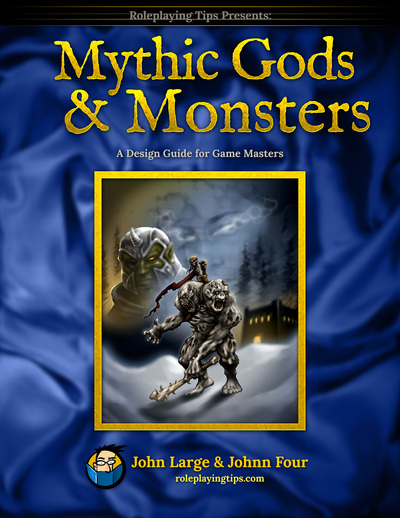 A Design Guide For Game Masters

John Large and Johnn Four
A guidebook for game masters on how to create mythic gods and mythic monsters that meddle in the lives of the player characters. This book makes filling out a pantheon with unique and interesting gods fast and easy. It then arms GMs with the tool to make mythic monsters to challenge PCs with.
Table of Contents

The main reason we created this book was all the stories we've read over the years where gods leave indelible marks on the story, the heroes, and the world. Dark cults serving nameless horrors must be stopped by brave heroes. Epic quests spawned by divine machinations put heroes into strange lands battling bizarre monsters. Godly ambition drives characters into places not meant for mortals.

But the problem is gods are given short shrift at the game table. Clerics and other player characters draw powers from these beings and wield it in their names, yet what thanks do the gods get for this? Those players who bother to write the name of a deity on their character sheet soon forget about it along with the 10 foot pole in their backpack. Neglected and ignored, gods underperform for your campaign, making your job as GM tougher.

The gods should be active plot agents for you! They should inspire factions and villains to threaten the PCs. They should provide you (un)holy places and dungeons for the party explore. And gods should give you a wonderful platform to drive stories from, and inspire and enhance your plots with.

However, we feel this is should not be done with simplistic confrontations with gods where they beat the PCs over the head with quests and plot hooks. Nothing breaks immersion more than NPCs with obvious golden exclamation marks over their heads. Instead, aim for subtle. Render the gods' influence through mortal religions, followers seeking divine favour, and monsters transformed by immortal threads.

This book will show you how to do this. We give you a system that starts at the top - god creation - and guides you through the layers of pantheon creation, religion creation, and divine-touched monster design so you have everything you need to meddle in the character's lives with the subtlety of Shakespeare. No longer will your gods be taken for granted and be just spell sieves for spoiled PCs. It's time for your gods to take part in your milieu and be active agents within it, to make your job of plotting and creating cool foes and encounters much easier. It's time to wield the Mythic God Generator!

John Large picked up his first roleplaying book in his early teens and, like many people back then, ended up being the GM because he had the books and no-one else wanted to do it.

John publishes Red Dice Diaries on YouTube, which has over 100 videos of actual play streams, GM advice, and player tips. Writing with Johnn Four on the RPT newsletter and this book has been John’s first foray into getting his work published despite having been an avid writer for a number of years.

Keenly interested in ancient myths and religions, John has many bookshelves creaking with works on mythology and civilisations from round the world. He is a great believer in looking at the original myths and tales behind many common aspects of modern roleplaying. After all, if you understand where the RPing came from then you can better understand where it is going.

Johnn was also a Dragon Magazine columnist for two years back when it was in print, and he wrote parts of the Dungeon Master's Guide II for WoTC.

He lives in Edmonton, Alberta with his wife Alana and his crazy yorkie-poo hound, Missy. Johnn's dice are now old enough to drink, vote, and have mid-life crises.