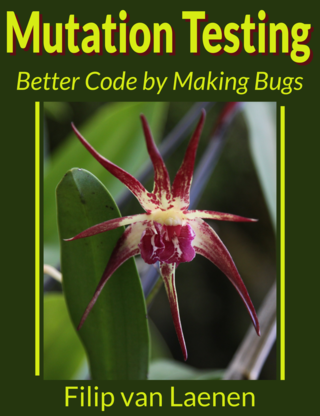 This book is 19% complete

Filip van Laenen
Are you already using TDD, measuring test coverage, and running static code analysison your code? Maybe you're wondering whether there's a “next level” in code quality? If so, you should check out this book and learn about mutation testing. Mutation testing changes your source code and then checks back whether your unit tests can catch the changes, just like they should catch bugs. Can they? Find out how it works, and why it works in this book.
Free!
With Membership
$7.99
Suggested price

Filip van Laenen has been a professional software developer at the Norwegian software company Computas since 1997. He started as a Java and Smalltalk developer, but over the course of the years held other roles in a large number of projects, both small and large, like tester, QA responsible, acting project leader, business analyst, architect and technical project leader. In his spare time he likes to experiment with code and new software development tools, and that's how he discovered mutation testing a couple of years ago. Since then, he has used it in some of his hobby projects, but also at work. He has held a number of presentations about mutation testing at software conferences.