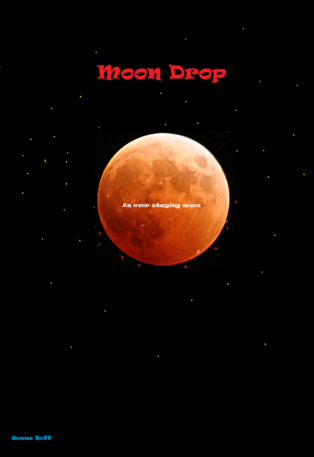 “An unexpected lunar eclipse occurred around 7am Eastern Standard Time. It should cease in a few hours. Be careful of the darkness.” The anchor man told us on the news, a specialist being phoned up to talk about what could have caused this lunar eclipse, especially when it wasn’t projected to occur yet.

“Hold Sun!” There was a cry that filled up every centimeter of the atmosphere. I decided to look around and floated around, not disturbing any of the creatures and soon saw the fires of the sun, as well as large chains around, that many of the creatures were holding, as well as drilling into the moon itself, and being held further by the countless amounts of bodies piling on top of them.

Weeks pass, and the moon has not moved it's position from blocking the sun. Plants are dying, animals slowly are too. Will the sun be set free before the world freezes over?

Jenna Toff was born and raised in New Jersey. She is currently studying English at Rutgers University. She has also studied Food Science and has ambitions to be able to use both within her future that has barely begun.