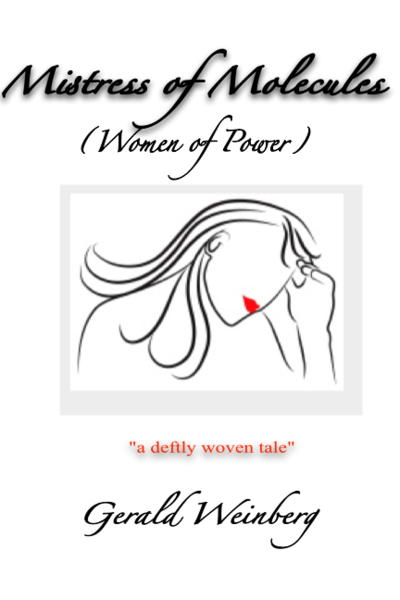 Gerald Weinberg
Libra use her amazing powers to terrorize those in power to liberate her planet–falling in love with a half-human, half-alien who opposes then helps her cause.
$6.99
Minimum price
$6.99
Suggested price

Blogger Michael Hunter said, "What I love most about the best science fiction is that it can be read on (at least) two levels: the surface story, and the underlying manifesto. Mistress of Molecules fulfills that definition of science fiction in spades. Recommended."

Eric Horlbeck said, "Mistress of Molecules is a great read! It is a clever, insightful book that makes you completely rethink your 'impossible' situations."

Etiquette bans wearing white after Labor Day. On Precursor, the planetary setting of Gerald Weinberg's immensely entertaining novel Mistress of Molecules, such a stricture is superfluous given the impracticality of white clothing in its dismal, pollution-filled environment. Which is not to imply that Precursor eschews rules; on the contrary, it is a society replete with onerous ecclesial canons enforced by an exclusively male ministerial arm against citizenry enslaved through addiction to crocus—a drug that is both vital to human survival in Precursor's hostile atmosphere and monopolistically controlled by a cartel of church, state and corporations.

The novel's opening scene dramatically portrays this oppressiveness in its depiction of a kangaroo court overseen by a pope who has preordained the sentence and execution of Nicholas Valois whose only real crime was being a threat to Precursor's ruling hegemony by his discovery of the means to manufacture crocus.

A science fiction novel with humans settled on different planets controlled by religious zealots may at first seem incongruous, but humans did not invent the advanced technology that enabled their galactic Diaspora. Instead, it was given them by the alien Zgaarid to use allowing the story to posit a future that is an extrapolation of the 17th and 18th century colonization of the United States and thereby to create an imaginative, yet never improbable, setting for the two principal characters - Libra and Andre.

Libra, who lives on Precursor, is Nicolas' posthumous daughter and a skilled chemist in her own right. Andre was born on Gemariah where, although he suffered a Dickensian childhood of moralistic abuse at his father's hand, he manages to become literate via the powers of his native curiosity and intelligence.

Structurally, the novel intertwines Libra's and Andre's stories leading to their fated meeting. Libra vows to carry on her father's legacy and free Precursor from its oppression by an elaborate plan of terrorism to bring down the ruling class. Andre resolves to liberate himself from the ungodly pedophiles and tyrants who inhabit the seminary to which his father exiles him as punishment for the sin of learning to read.

For both, their wits and their confidence are the keys to their salvation, but it is not a perfectly smooth road either ends up travelling. As their stories unfold, the pair has much to learn about unintended consequences and much to unlearn about their own unexamined and naïve assumptions.

While such a tale may appear thematically to be overly somber, Weinberg works with a gentler touch as he deftly weaves comedic scenes throughout. Some involve imaginative and unexpected minor characters, key to enlivening the plot and providing many delights to readers; but most are in the form of the small and big moments when Libra and Andre come to realize the limits of their own intelligence and the possibility that, as Hamlet reminds Horatio, there is more than is dreamt of in their philosophies.

The moment of change, the teaching moment, is the major surprise that Weinberg's novel holds for its readers. No one should miss the opportunity to partake in such an enjoyable and enlightening journey - something only the most magical storytellers conjure in their writings.