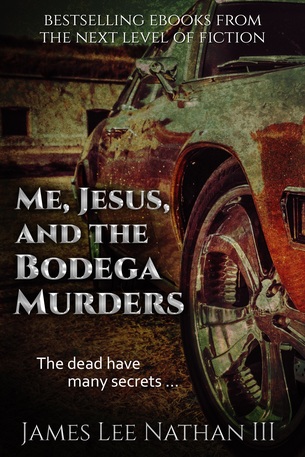 Me, Jesus, and the Bodega Murders

Me, Jesus, and the Bodega Murders

How long can you keep a secret before it eats away at your soul? This is the dilemma that faces two young boys now grown into manhood. Do they continue living a lie, or is it time for retribution?

The scene outside of a north Corona Bodega is a hive of activity. A descending frost chills the air and, freezing everything it touches.  Two anxious homicide detectives wait in the damp cold for the arrival of their supervisor.

“Let me do the talkin,” the senior Detective says and his partner nods in approval.

Captain Don McRae walks towards them. The first thing the detectives see are the mustard and red onion stains on his powder blue wool pullover.

“What do we have and yes I ate a frank on the way here,” the Captain says removing a handkerchief to pat at the stain. Making it worse.

“Sir we have either a botched robbery or a gang hit,” says Detective Dale Simmons, the first on the scene. The Captain is not impressed.

“Twenty years of investigating crime scenes and that’s all you can come up with?” the detective is reluctant to continue but does so anyway.

“Sir the scene is a cluster fuck,”

“Details…show me what a cluster fuck looks like please,” the three men move towards the Bodega where only two survivors remain. A minor mob associate, Antonio ‘Toni’ Bello escapes the carnage with a gun wound to his upper shoulder.

“Is that who I think it is?” asks the Captain.

“Yes sir, that piece of shit Bello is one of the survivors.” They enter the Bodega.

Outside in the rear of an ambulance, the other survivor, a young boy covered in a NYPD jacket, sits in a catatonic state. A medic and social worker, race to clean the blood from his face and hands. He clutches a peculiar looking puppy in his arms. The boy is oblivious to all around him with one exception, the other survivor on the gurney passing him.

Young Darion Knight’s eyes focus on the man, his hold on the pup forces a small whimper from the dog. The man motions to Darion with a wave and a look that says ‘keep your fucking mouth shut.’

Darion’s mind registers the moment, along with the coldness of the night and the scent of blood. He stores it for safekeeping. Every aspect of this night will haunt him for 20 years, yet fear is not the glue keeping his mouth shut. No, it is regret, an overwhelming feeling of guilt, and something ancient that grips Darion’s soul, vengeance.