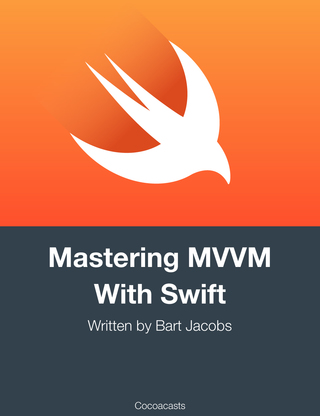 “I don’t feel in control of my project’s architecture.” - You

“MVC simply doesn’t cut it. There must be a better solution.” - Yours Truly

Firing up Xcode and starting a new project is a great feeling. The first few days or weeks don’t feel like work. Everything goes according to plan.

Yet you’ve done everything right. You’ve stuck to the rules of the Model-View-Controller pattern. Why have you coded yourself in a corner? And why is it frustrating or downright scary to add features or refactor existing functionality?

MVVM extends MVC by resolving common issues. The result is a robust application architecture with lean view controllers, improved testability, and a better separation of concerns. How does that sound?

Take Control of Your Project With MVVM

In Mastering MVVM With Swift, we refactor an existing application built with MVC to use MVVM instead. The results are dramatic and the MVVM pattern is surprisingly easy to adopt in your own projects.

After a short introduction, we take an application built with Model-View-Controller and refactor it to use Model-View-ViewModel instead. Along the way, you learn about the anatomy of view models, how to create them, and how to test them.

Last but not least, we add protocols and protocol-oriented programming to the mix to further simplify the view controllers in the project.

At the end of this course, you have the knowledge and, more importantly, the hands-on experience to apply Model-View-ViewModel in your own projects.

In Mastering MVVM With Swift, you learn everything you need to know to integrate MVVM in a new or an existing Swift project. We focus on the key aspects of the pattern and refactor an application that takes advantage of the core features of MVVM. We use the latest and greatest to build an application, which means we use Xcode 9 and Swift 4.

Adding a feature forces you to wade through hundreds of lines of code. You hope you don’t break anything while you carefully add a few lines of code. Don’t get me wrong. Your code isn’t bad. But there’s just so much of it. You’ve applied the Model-View-Controller pattern like you were told to and you still end up with an architecture you aren’t quite happy with. Does this sound familiar?

Put Your View Controllers On a Diet

It’s time to put the view controllers of your project on a diet. I’m sure you’ve heard about the Model-View-ViewModel pattern. It’s the new cool kid in town. But the thing is that it isn’t a kid. MVVM has been around for many, many years and has earned its stripes. It’s a proven strategy for robust, scalable applications.

Where Should This Code Go?

I bet you’ve asked yourself many times “Where should I put this piece of code?” Every developer asks himself/herself this question, multiple times a day. If you’re still using MVC, then chances are that the answer is “the view controller”. Stop. Give MVVM a shot. You can thank me later.

MVVM is a perfect fit for Cocoa applications powered by Swift. The view model unburdens the view controller from the ungrateful task of data manipulation and transformation. The result is a focused, testable view model and a skinny, lightweight view controller.

Even though I was already familiar with MVVM, Bart’s course showed me a different perspective on MVVM by refactoring a complete application built with MVC. He illustrates how MVVM can improve a project’s architecture and testability, and how reactive programming fits in.

A big thank you. This has been the single most effective course I've taken about iOS. I put it into practice right away and our App Store app, and its testing, has benefited greatly.