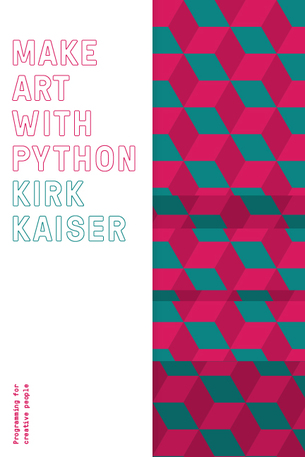 Make Art with Python was written to teach creative people the joy of computer programming.

If you've tried to learn programming with traditional books or online courses, only to get stuck, this book is for you. With step by step, visual programs, we teach the fundamentals of computer programming so creative people can understand.

If you've struggled with learning programming in the past, or have thought to yourself that you'd never learn to program, this is the book for you.

It takes a non-traditional approach to teaching computer science and programming through visual programs.

If you've never considered yourself a "math" person, or you consider yourself a language, or visual first learner, the exercises will quickly get you up and running. You'll be writing your first program right from the beginning, and each chapter will bring about a new, fundamental insight about the process of programming.

KP Kaiser is a backend and creative developer who primarily works in Python.

Previously, he was the lead backend developer at Triller, scaling to the app from zero to millions of users.

Before Triller, he wrote the backend for a social app called Somebody which was also in the Top 100 free apps for the App Store, won an award for a site built for GE, helped design a lighting control system, and ran the infrastructure for a large eCommerce company.

He also developed an iPhone app that explored tracking the human mind during meditation using raw physiological measurements. The first product available from these experiments was Buddha Mind, an iPhone app which incorporated a Bluetooth LE heart rate monitor to measure and track your Heart Rate Variability during meditation

He skateboards when not programming or shooting photos. In another life he hiked the first half of the Appalachian Trail, lived in the Panamanian rain forest, and backpacked most of Central America.