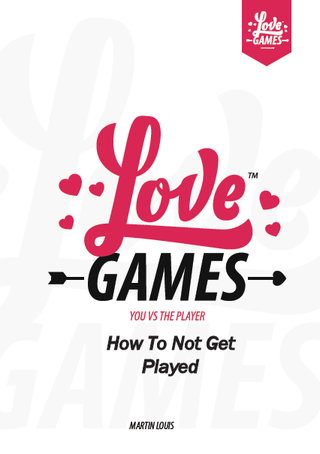 Love Games How To Not Get Played

Love Games How To Not Get Played

Many consider this the go to guide so they wont get played by guys again!

There are a lot of women and men out there who are getting played and used by other people and that is really an issue. And what’s really complicated here is that most of these people have no idea that to a certain extent has to deal with them as well!

Not every guy is looking for a relationship, sometimes there are other purposes in between; thus knowing you are in for it, they take advantage of your sincerity and innocence in order to get what they want from you. In addition, the worst thing is that men these days are learning how to improve ‘their art of seduction’ as they call it, through books and YouTube videos.

There is nothing basically, standing between them and their lust towards satisfying their sexual desires…and their victims are the last ones that really matter in this twisted equation... seriously these f*&$ boys are NUTS!.

• Having sex WAY TOO EARLY!

• Asking the wrong questions or not asking any questions at all.

• Not having a proper relationship with themselves which makes them desperate and jump into any players arms or just bad relationships.

• Not taking the time to know the guy.

WHAT MOST PEOPLE ARE DOING

There are some people who are trying to get involved in a relationship at any cost; they have premature sex, try to give ‘the best orgasm’, offer all of their attention, love and affection or even expensive gifts, and OUCH!! They still get rejected! Fear and desperation are not the ‘virtues’ to be displayed in such situations because any good predator could ‘smell’ them.

There are situations when we really love someone and we are willing to try anything to get that person to love us back or to get her/him back into our lives. This leads into waiting by the phone for a text and the only time you hear from them is when they want something. This should sound the alarm bell, but unfortunately, we are blinded by our own disillusions and hopes and twist the actual facts into scenarios that would put that person into good light when in fact it’s really not the case.

We convince ourselves into thinking we can change that person and we plot and plan how to get back with him or her to only be hurt and played at the end... again and again like in an endless rollercoaster.

I went through some years of crap where I was played by men of all sorts, so I know what it's like and it really sucks! Luckily, I sought help and I was lucky enough to have few dating/relationship mentors in my life from whom I was able to get all the information.

This way I was able to implement a strategy in my dating life and this helped me never get played again! I also had some straight Friends who are players and I learned a lot from them. How these guys work…what are their main schemes and what exactly they do to trick girls.

Few of them even went as far as reading BOOKS on how to manipulate girls, and that’s when I decided to write this book; After all those years of pain and sorrow, I decided it was my mission to write a book that would help men and women never to be played again.

I wanted to raise awareness and open people’s eyes towards something that does not seem that important, but which can tear destinies apart: The Human relationships!

Names Martin i am a Full-Time Content Creator traveling the world doing what i love to do like everyone should.

i have had some big lessons in life and i love writing them in e-books so others can learne.

This is what you will discover.

• What Attracts A Player?

• What are a player's Standards?

• Seven questions to ask a date to find out what he wants from you.

• A 3 Month Dating Plan to keep you from getting played.

• Why having standards is important.

• When is the right time to have sex.

• Signs that your date or man is a player.