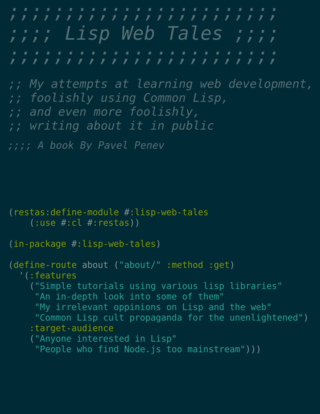 My attempts at learning web development, foolishly using common lisp, and even more foolishly, writing about it in public

Today we have more programming languages than we can count. Somehow, Lisp still manages to stand out, at least for me. I've been obsessed with the lisp family of languages for four years now, and I've been especially interested in Common Lisp, which I consider to be the best general purpose dialect. It is an easy language to pick up, and a difficult language to master. So far, every day spend learning lisp has been a huge plus for me, so all those difficulties have been worth it. Lisp is fun, challenging and rewarding of such efforts. No language I've picked up since or before has felt the same way, they were all either needlessly complex(most of the complexity in Lisp is there for a reason), or too simplistic and lacking in sophistication when that is needed.

As for how practical this language is for web development, It's as practical as you make it. Lisp is the perfect language for the gray areas where were we still haven't quite figured out how to do things. I believe the web is one such area, and experimentation and playful exploration of ideas is vital. This is what Lisp was designed for, not for the web specifically, but for what it is, a new playground where flexibility and creativity have room to grow. Common Lisp has been a faithful ally in my self-education. Maybe it can be one for you too.

Whats in the book

The book is a set of tutorials and examples. It uses the Common Lisp language and some of the libraries we'll be using for the examples and tutorials include:

Who is this for

This book is for anyone interested in Lisp and web apps. I assume you have some familiarity with both subjects, but I don't assume you are a Lisp expert, you can just read a few tutorials to get the basics and get back to my book to get started with web apps. I've linked some of them in Appendix B. So you need to know what (+ a b) means, I won't explain html and css to you, and HTTP shouldn't be a scary mystical acronym to you. Also some knowledge of databases would be good. In other words, I assume you are a programmer, know the basics and just want to play around with lisp. Happy hacking.

Professional web developer by day and misguided Lisp hacker whenever he can find the time for it. Lover of all things weird. Lisp, Emacs, BSD, and other 70s technology keep him from running off into the woods where he can enjoy freedom from the tyranny of JavaScript, CSS, significant white space and other obviously bad ideas that don't seem to bother anyone else.