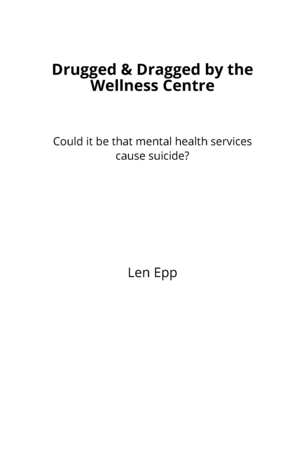 Every school has its Chamber of Secrets and a Basilisk hidden within. Read the author's story as he writes about how he was almost killed by the Wellness Centre and uncovered a medical scandal of money, murder and mystery on the island of Crazy Rich Asian fame and beyond as his research unveils the lethal, but profitable, Wellness effect.

Learn more about the Wellness Effect and how it can kill you. At the same time, see the mental health industry as clearly as the light of day. You will learn more about what is going on inside the Wellness Centre, psychiatric hospitals, our social services, the Singapore Psychiatric Association and peer inside the feared Woodbridge Hospital reconstructed from many patient accounts.

In his final semester, ignorant to its true nature, he was pointed in the direction of SMU's Wellness Centre when he told faculty he was stressed out and wished he could reduce his workload. The centre then instructed him into the Clinic @ Campus office where he was peddled these “medicines” by the GP and took the bait. From a mere 10+ pills, he was disabled for 6 months. He suffered many days of no sleep convulsing in bed. At one point he developed severe pain and seizures due to the drug withdrawal reaction, hung a rope around the fan, ready to end his misery.

If he had succeeded, his lifeless body would have been found dangling from the ceiling and his parents would have attributed it to “stress” or “depression”, especially because it was 5 months after exposure to the drug. However, the fan broke and he survived, and is here to tell this tall tale. Multiple complaints found that no one really violated policy. And if SMU policy was copied from NTU and NUS, he realised that this threat could be more entrenched than he imagined.

Trained to think the business way, he sliced up the entire industry right into the school compounds to unveil this shocking discovery. It reveals no conspiracy but a careless and lackadaisical distribution of lousy products with poisonous qualities, nicely angled at the students of our schools. In disbelief, he is fighting for school or government policy to be changed to further restrict the drug’s proliferation and to raise awareness of the dangers of benzodiazepines & other drugs in the hope that people will be aware and protected from the torture these “medicines” can inflict.

For the safety of those who dare venture into the mental health system, knowingly or unknowingly, the author will reveal its inner workings. Every educational institution has a chamber of secrets and a basilisk within.

Read intently as the author recalls the minute details and feel the drama as he shares his op eds and reports as he fiddles around with the system and unravels the interconnected web and follows the trail of bones that starts at your school’s counselling centre and ends at IMH.

You are welcome to message the author to contribute your stories anonymously about your good or bad experience with your school's counselling centre and tip-offs on other student disappearances @benzovictim. However, his story alone is a testimonial that will captivate and bind.

Len is a Leanpub co-founder. He likes cats.