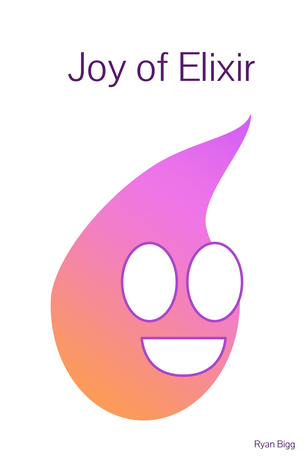 A gentle introduction to programming for beginners, using the Elixir language

Joy of Elixir guides first-time programmers through the paces of learning their first programming language in a fun and enjoyable way.

The book is currently very much a work-in-progress and I'm sure there will be people out there who can submit feedback on how to improve it. If you find any mistakes or anything at all that makes you uneasy, please do submit an issue over on the GitHub repository, letting us know what chapter you saw the mistake.

If you don't want to submit it there a quick email to errata@joyofelixir.com will work just as well. Just make sure to mention which chapter and some context of where you saw the thing that caused you to email us.

Why was this book written?

Joy of Elixir came about because I saw that there was not very much when it comes to absolute beginner material for learning Elixir. There's the excellent Getting Started guide on elixir-lang.org and the Programming Elixir book, but those feel like they're more targeted towards experienced programmers. They teach Elixir with a lot of assumed knowledge about programming languages. They're great books, but they're only great books for experienced programmers.

There's also the wonderful Elixir School site that serves well as a reference guide to the features of Elixir, but what newbies really need is a gentler introduction to Elixir.

Joy of Elixir avoids assuming you know anything about programming while teaching you about your first programming language: Elixir.

It seemed like there is a vast, empty, cavernous void where there should be something like the excellent Learn to Program book by Chris Pine. That book is for another programming language called Ruby; but there feels like there should be an equivalent to that for Elixir.

We have people completely new to programming wanting to learn Elixir -- because people who have learned Elixir already told them about it and how cool it is! -- but the support is not-quite-there yet. So this is an attempt to fill that void. Essentially a response to: "Why won't somebody think of the newbies?". Well, someone is thinking of the newbies.

I want Joy of Elixir to be the go-to-resource for teaching people programming for the very first time using Elixir. I want them to experience the joy that Elixir (and programming in general) can bring to people. I want them to feel like they have power over the machine because of the knowledge contained within this book.

Ryan has an extreme interest in introducing newcomers to programming. He does this by providing mentoring and writing books on programming. He has previously written books for the Ruby language, but is now trying his hand at an Elixir book.

You can find more info about Ryan on his site: ryanbigg.com

Note: This Table of Contents is not the final table of contents. Things may move around, appear, disappear or otherwise change.

Part Two: And away we go

Part Three: Building on the foundations