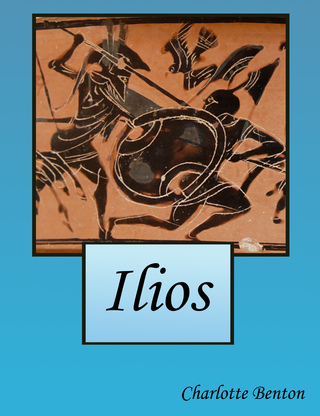 A Novel of the Trojan War

Charlotte Benton
"Do not give me games and flowers--give me a shield and a helmet! Do not let me hear idle gossip--let me hear the clarion call of the war trumpet--let me hear the cries of the horses and the wheels of the chariots--let me hear Ares calling out to his followers and let me ride at his side!" (From the chapter "Pyrrha")
Table of Contents

I have retired this book for the moment because it just needs too much work.  I was too hasty in making it available, and I realize a lot of the changes that need to be made, but I don't have time right now, with my studies, to make those changes.  So while those changes are pending, I don't want anyone else downloading it.

Ilios is a re-telling of the Trojan War through the perspectives of various mythical figures. This is an account of the whole war, from the quarrel of the goddesses at the wedding of Peleus and Thetis, all the way up to the sack of Troy. The often vignette-like stories reveal glimpses of the characters' psyches and provide personal views of pivotal moments in the war.

Each character enters the story as the war becomes entwined in their life:  for Achilles, this is even before his birth, as the seeds of the war are sown at the marriage of his parents.  With her natural gift of foresight, Thetis knows that the war will cost Achilles his life, and she tries to protect her young son in some very unusual ways.  Paris plays judge in a divine beauty pageant, sealing the doom of his people.  The unsuspecting Menelaos allows the Trojan prince into his home as a guest, little knowing that he'll lose his wife, the inestimably beautiful Helen, as a result...

I've attempted to be entirely accurate to the myth, though it does stray here and there.  (I also often use variant myths less familiar to most modern readers, so hopefully there are a few surprises even for those who know the myth fairly well.)

Though the text is complete, this book is currently still a work in progress.  I'm hoping to get some reader feedback in order to fix up any and all remaining problems before I make physical copies available.  (The chapters are all there, in other words.  Some of them just need improvement.)