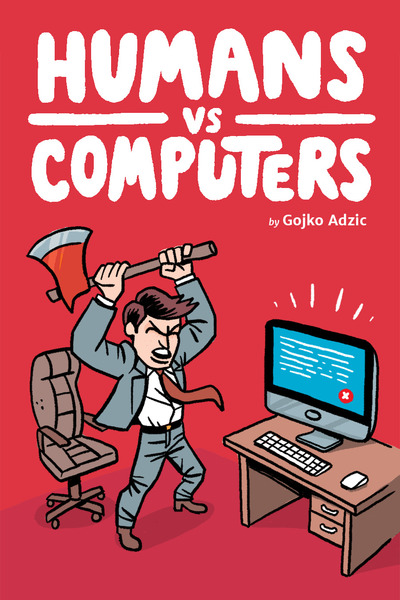 Wrong assumptions, computer bugs, and people caught in between

Humans vs Computers is a book about ordinary people caught between wrong assumptions and computer bugs. You’ll read about humans who are invisible to machines, how a default password once caused a zombie apocalypse and why airlines sometimes give away free tickets. This is also a book on how to prevent, avoid and reduce the impact of such problems.

Our lives are increasingly tracked and monitored by software. In this brave new world, humans can’t cope with information overload. Governments and companies rely on computers to automatically detect fraud, predict behaviour and enforce laws. Inflexible automatons, barely smarter than a fridge, now make life-changing decisions. Computers are determined to follow instructions to the letter – but the instructions are human, and flawed! The results can be unexpected, catastrophic, and very, very funny.

Humans vs Computers is a book about ordinary people caught between wrong assumptions and computer bugs. Some of the hilarious examples include humans who are invisible to computers, how a default password once caused a zombie apocalypse, and why airlines sometimes give away free tickets. This is also a book on how to prevent, avoid and reduce the impact of such problems.

From the man whose new personalised number plate brought him 2,000 parking fines a month to the prisoner released 3 years early by an automated parole review, these cautionary tales will make you laugh till you cry.

When you’re banging your head against a digital wall, the stories in this book will help you understand better what’s going on and show you where to look for problems.

For people involved in software delivery, this book will help you find more empathy for the people suffering from your mistakes, and discover heuristics to use during analysis, development or testing to make your software less error prone.

Gojko Adzic is a partner at Neuri Consulting LLP. He He one of the 2019 AWS Serverless Heroes, the winner of the 2016 European Software Testing Outstanding Achievement Award, and the 2011 Agile Testing Days Most Influential Professional award. Gojko's book Specification by Example won the Jolt Award for the best book of 2012, and his blog won the UK Agile Award for the best online publication in 2010.

Gojko is a frequent keynote speaker at leading software development conferences, and one of the authors of MindMup and Claudia.js. As a consultant, Gojko helped companies around the world improve software delivery, from some of the largest financial institutions to small innovative startups.

To get in touch, write to gojko@neuri.com or visit http://gojko.net