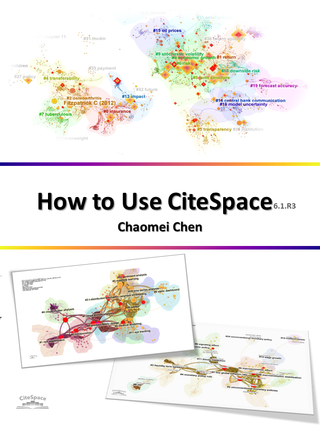 This book shows you various practical step-by-step instructions as well as the design principles behind them so that readers will be able to create high-quality visualizations and, more importantly, to make sense of various patterns and what we can do with them.

What are the landmarks and critical paths in a field of research? What can we learn from published scholarly works? CiteSpace is designed to find answers to these questions through interactive visual explorations of actionable patterns and trends. This book explains the underlying principles and analytic processes of learning the state of the art of a field of research. The new edition is based on the CiteSpace Advanced version of 6.1.R2. Currently, it contains chapters on download and installation of the software, collecting bibliographic data from the Web of Science, CSSCI, CNKI, and PubMed, and step-by-step demonstrations of creating and interacting with visualizations of a variety of topics. Chapters on other data sources will be updated, including Scopus and Dimensions, and they will be incrementally incorporated in subsequent versions of the e-books.

I am a Professor of Informatics in the College of Computing and Informatics at Drexel University, Philadelphia, USA. I am the founding editor and the Editor in Chief of Information Visualization, published quarterly by SAGE. I am also the founding editor and the Chief Field Editor of Frontiers in Scholarly Metrics and Analytics, an open-access journal. I am the author of several books, including Representing Scientific Knowledge: The Role of Uncertainty (Springer, 2017), The Fitness of Information: Quantitative Assessments of Critical Evidence (Wiley, 2014), Mapping Scientific Frontiers: The Quest for Knowledge Visualization (2nd Ed.) (Springer, 2013), and Information Visualization: Beyond the Horizon (Springer, 2004, 2006). I have been developing and maintaining CiteSpace - a computational tool for visualizing patterns and trends in scientific literature.