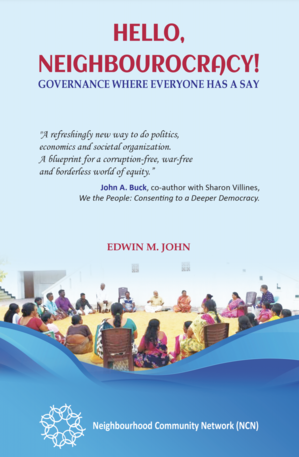 Governance Where Everyone Has A Say

"The booklet has inspired me as a city councillor in Augsburg to focus on neighbour-to-neighbour participation and encourage it to become a powerful social and ecological motor in our city." - Dr. Pia Haertinger, Augsburg, Germany

Neighbourhood Parliaments are a the ultimate celebration of democracy in its truest sense. This handy book covers the knowledge, skills and tools required to run such parliaments. More importantly, it covers promising practices. It is a must read for everyone interested in grassroots democracy.

Edwin M. John, 76, of India studied philosophy and theology and secured a Master's degree in journalism in 1977 from the University of the Philippines. He directed South Asian Religious News and edited Health Action, a national monthly for health activism in India. Various processes in his life convinced him that unless people are organized through small-sized forums, and connected for power through the multi-tiered federations of these forums, not much could be achieved for social, political and economic liberation of people. Hence, he promoted neighbourhood forums of about thirty families each.

Then Inclusive Neighbourhood Children's Parliaments and their global networks emerged. Gradually he gave shape to neighbourocracy as an alternative political system and promoted "marketing-from-below." He gets invited to various countries to share the concept and related experiences. He has shared this concept at the UN, too, especially, serving as a Conference Focal Point for the Special Consultative Status that the Neighbourhood Community Network enjoys with UN ECOSOC from July 2017.

Another world is easily possible 10 Attending to the root causes 11 Democracy fails to bring power to people 15 The solution is….. 20 Five Principles 23 Neighbourhoodization and integral development in Kodimunai 36 Kerala gives the lead 38 Neighbourhood Groups and Neighbourhood Assemblies in Kerala. 32 Enters Sociocracy! 42 Neighbourocracy is born 48 A child-led global-thinking and local-action process 50 Let us join hands 55 Movement and Leaders 58