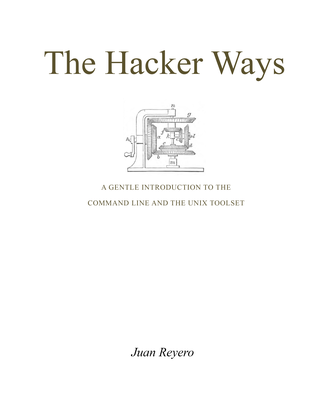 A gentle introduction to the command line and the UNIX toolset.

Juan Reyero
The UNIX toolset is the work environment of choice of a growing number of engineers and research scientists. If you want a career as an engineer, data analyst, programmer or researcher, you'll need to master it. This book will teach you all you need to get started. UNIX can be daunting until you understand its logic: by the end of the book you will, and you'll know where to look for more.
$14.99
Minimum price
$24.99
Suggested price

There is a better way to deal with computers. Hackers have been developing and using it for at least 40 years: it is the way of the command line, of the conversation with the computer in languages that are neither human nor machine, but a carefully crafted middle ground. Hackers, by the way, is how we call people who know well their tools, who dare to explore, and who need to build things.

If you want to use the computer to solve problems and you are not comfortable in a UNIX command line environment you will benefit from this book: it will take you to a level of understanding from which you'll be able to move forward, a first but solid stepping stone in the way to profficiency with the tools of the hackers.  Having a firm grasp of the tools and the ways of working on the command line will make you more efficient, more productive, and able to tackle more challenging problems.

The Hacker Ways will teach you all you need to know to get started.  You'll learn how the command line works, and you'll understand its logic; you'll learn to edit files in Vi and Emacs, the two classic text editors; you'll learn about programming, you'll write your first programs.  You'll learn tools to do math and data analysis.  And you'll start playing with it all, which is the key to real learning.

I wrote most of the contents of this book in order to introduce a smart and motivated audience (my two sons) to the world of the command line, the classic editors, and the basics of programming.  It has already achived its first objective.  I would be very glad if it could help you as well.

Juan Reyero has been working as a research and development engineer at Hewlett-Packard for the last 18 years.  First HP-UX, then Linux, and now OS-X: he has always used the UNIX tools for his research, he's built key development tools with them, and he's been teaching and proselitizing them in the HP R&D community and beyond.