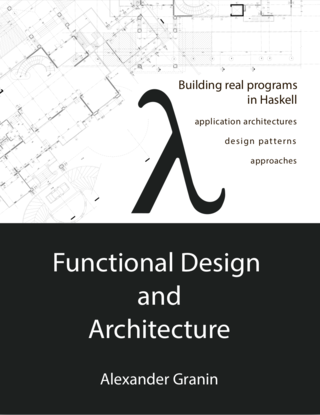 Software Design in Functional Programming, Design Patterns and Practices, Methodologies and Application Architectures. How to build real software in Haskell with less efforts and low risks. The first complete source of knowledge.

Important: this is the First Edition of the book.

Consider buying Functional Design and Architecture (Second Edition) by Manning instead. It's quite reworked, but yet a WIP.

It is a fundamental book about Software Design in Haskell. The main idea of this book is to provide a comprehensive source of knowledge, a complete methodology of building real world applications in Haskell. Application architectures, best practices, design patterns and approaches, - all the information you need to achieve a simple, maintainable, testable code with low complexity and low risks. By reading this book, you’ll learn many useful techniques: from the requirement analysis to the implementation of particular subsystems such as SQL and NoSQL databases, multithreading, logging. You’ll learn about design principles, application layers, functional interfaces, Inversion of Control and Dependency Injection in Haskell.

The book is very practical. It will be useful for software engineers who want to improve their software design skills with a strong relation to many advanced Haskell concepts.

The book requires a certain level of Haskell knowledge, up to intermediate.

The book covers a big gap in the Haskell ecosystem: the lack of resources about high-level application design. It’s also important that the ideas from the book were used in real production with great success. The book offers my own methodology - Functional Declarative Design, with Hierarchical Free Monads as a core technology. Using this methodology, I created several real-world frameworks, and they are driving a successful business in several companies.

There is a colored hardcover version of the book of the highest printing quality. This is how it looks like (video). Shipping is only across Russia. Contact me if you are interested. International shipping from Russia stopped working after January 2021 due to "new customs rules". You can find the detailed explanation here.

The book is project-based. There are two showcase projects for it:

I designed the following real-world frameworks using the ideas from the book (with the help of other people of course):

All of these frameworks drive the business of an Indian financial company Juspay. Its mobile apps and financial backends have hundreds of thousands lines of code, and these frameworks are really tested in production. This technology helped the company to grow up and enabled a wide adoption of PureScript and Haskell. Essentially, Juspay was the first company I used my ideas in. We found that Hierarchical Free Monads hide all the complexity of implementation details behind convenient interfaces so that the code is understandable by not only developers but by managers as well. This helped us to easily reason about the domain, the logic, the business goals and requirements. My approach also brought confidence that Haskell and PureScript are not only academic languages.

Author of the book "Functional Design and Architecture"