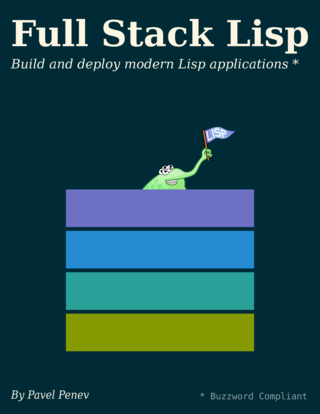 This book is 25% complete

Pavel Penev
Lisp aliens have infected the terrestrial memetosphere with the meme complex of Common Lisp. The mindless human hosts find themselves helpless spreaders of the glory and joy of Lisp Development. Join us and become a great Lisp Programmer! Learn how to build and deploy modern Lisp applications in the booming ecosystem of modern software inhabited by lesser technologies!
$20.00
Minimum price
$25.00
Suggested price

After a couple of years of playing around with Scheme and later Clojure around 2008-2010 I made the fateful decision to learn Common Lisp. Originally the plan was to learn just enough Lisp to be able to read On Lisp with proficiency and increase my mad Clojure skills, which was my favorite language at the time. My first reaction to this mutable and downright archaic dialect was a mix between fascination and revulsion. Uppercase symbols, uuuugghhhh! Somehow this mess of a language grew on me and I've been in love ever since. I've half joked about it infecting my brain, and if you think of a programming language as a memetic complex, it obviously is capable of infecting human hosts, so I'm not sure the joke isn't an actual fact. Send Help!

When I look back on the last five years I've been involved in this horrible mess, the amount of change is astonishing. Lisp might be the mother of all late bloomers, well into its fifties it grew into a viable platform for actual applications written by mortal programmers. The Common Lisp ecosystem is growing into a very usable state, it's a great time to explore how to actually use this language in a practical manner from top to bottom and deliver modern applications.

This is a book about application development. That means we'll explore run-times, servers, storage, frameworks and deployment, as well as various ways to use Lisp as part of a client application. In addition tools, libraries and practices the author finds useful will find their way into the book.

This book assumes only basic Lisp knowledge, complete newbies should read an introductory tutorial before reading this book.

The following is a quick outline of some of the topics this book will cover:

Professional web developer by day and misguided Lisp hacker whenever he can find the time for it. Lover of all things weird. Lisp, Emacs, BSD, and other 70s technology keep him from running off into the woods where he can enjoy freedom from the tyranny of JavaScript, CSS, significant white space and other obviously bad ideas that don't seem to bother anyone else.