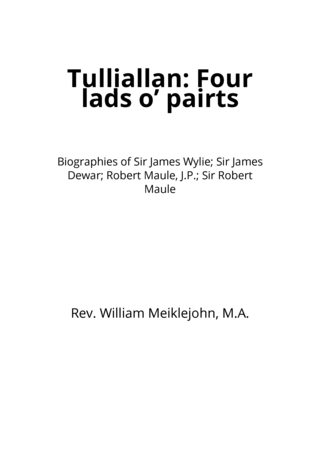 Kincardine-on-Forth has a long and illustrious history as a trading port.  This book provides comprehensive biographies of four of its most famous sons.

Sir James Wylie (1768 - 1854) was surgeon to the three Czars of Russia, organiser of the Russian Army’s medical service, and founder of the Medical Colleges of Moscow and St Petersburgh.

Sir James Dewar (1842 - 1923) was President of the Chemical Society and Fullerian Professor of Chemistry at the Royal Institution (a post held previously by Michael Faraday). He was the first person to liquify oxygen and inventor of the Dewar flask, later commercialised by Thermos as the Thermos Flask;

Robert Maule J.P. (1832 - 1901) and his son Sir Robert (1852 -1931) were successful entrepreneurs who established and ran 'Maules', one of the most successful early department stores on Edinburgh's famous Princes Street. Today their Edinburgh store is home to House of Fraser.

100% of proceeds from this book go to Kincardine Local History Group. The group is a non-profit community-run organisation whose aim is to research, preserve, and promote the town's history for the benfit of future generations. By purchasing this book you will be directly supporting the preservation of Kincardine's local history for the people in the town as well as those who trace their family roots to Kincardine.

Rev William Meiklejohn (1914-1997) was born in Wick where he soon displayed the academic talents that would serve him well throughout the rest of his life. He earned the dux medal at his local high school and went on to study at Edinburgh University from which he later graduated with an MA and BD.

His first appointment was at Inverallochy, Aberdeenshire in 1938 and in 1942 he moved to Tulliallan where he stayed for 30 years before eventually taking charge at Roseneath in Dunbartonshire until his retiral in 1978.  After retireing Rev. Meiklejohn moved to Linlithgow where he again put his academic talents to good use, this time in the service of local history research. Throughout this period he researched many topics relating to Scottish history and bequeathed their copyrights to local history societies upon his death in 1997. It is the results of some of this extensive research that is presented here in Tulliallan: Four lads o' pairts.

Kincardine Local History Group would like to acknowlege its debt to Rev Meiklejohn for all his meticulous hard-work compiling this information.