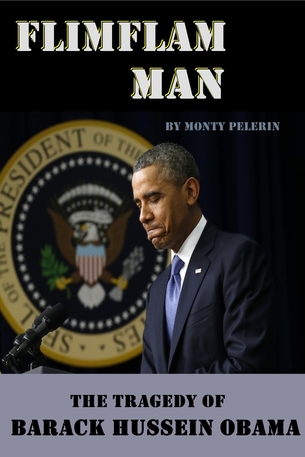 The Tragedy of Barack Hussein Obama

Monty Pelerin
President Barack Obama is the most unusual president of my lifetime and perhaps the life of the nation. An unprecedented, popular beginning was quickly squandered leaving the dreams and hopes that propelled him to office shattered. Camelot was not to be. Obama's phenomenal fall from grace creates a serious political liability for the media and the Democrat Party. Supporters may turn on him in an effort to save themselves. For political aficionados, it doesn't get much better . For those who love their country, it is despair. The final act is apt to be the most exciting.
$7.99
Minimum price
$11.99
Suggested price

"We likely have the most ignorant, ideological, brainwashed dupe this country has ever elected to high office."

Barack Obama is the most unusual president in my lifetime. He entered office with messianic-like qualities. He will leave office as a failed president. The hope and promise that began his Administration is gone. In its place is the tragedy of hopes dashed, a nation worse-off and a seemingly oblivious president flirting with impeachment. Once the glow of the halo dissipated, Obama was dependent on policy and substance. Unfortunately he had neither:

"There never was any substance to the man or his Administration. The image was like an old Hollywood set, all facade and no depth. Now the winds of reality are slowly and inexorably tearing away the facade."

"Arrogance when it is accompanied with incompetence is stupidity of the highest order, and usually fatal." "He is still an intellectual child, locked into the ideas from the 60′s -- both the 1960s and the Marxist 1860s. In that sense he is an intellectual dwarf, frozen in a state of puberty. His "knowledge" is based on nothing but the discredited ideologies of Socialism."

"This Wizard of Oz was not some bumbling, harmless old man. He was pompous, arrogant, mean, disingenuous and incompetent."

His phenomenal fall from grace creates a fascinating political drama. Supporters, particularly the media and Democrat Party, must wrestle with continued support or abandonment. For some, including Obama, this decision may be existential:

"The most overt and ominous sign is provided by Democrats up for re-election. None want to be seen with Obama. He has leper-like appeal as a result of his policies and declining poll numbers."

Obama has not worn well and accomplished little, probably nothing:

"Nothing that Obama has done can be called an achievement, at least a positive one. The medical system is in disarray with additional unpleasant surprises ahead. The economy is not recovering. Joblessness is a disgrace. Our allies are embarrassed by US foreign policy blunders and slights. Obama's penchant for lying is now widely recognized and he is up to his neck in scandals." "Obama's legacy is apt to be that he out-Cartered Jimmy Carter."

Seemingly desperate, Obama appears willing to do anything during his remaining term in office to establish a legacy and the transformation of America. This pursuit is foolhardy and seemingly delusional, having the potential to destroy him and his party. He flirts with impeachment, seemingly oblivious to the risks.

For political aficionados, it is the best of times. For those who love their country, it is a time for despair.

“Monty Pelerin” is a pseudonym derived from The Mont Pelerin Society. The pseudonym was adopted because I didn’t want any personal political views or opinions to leak into the college classroom. I no longer teach, but the name has taken on its own identity as a result of Monty Pelerin's World, a website begun in 2009.

The photo is that of Friedrich Hayek, Nobel laureate in Economics in 1974. He was the founder of the Mont Pelerin Society in 1947 and is used to represent Monty Pelerin.

“Monty” retired to Asheville, NC several years back. His career included corporate and academic experience. Corporate experience was primarily in the financial area and included several CFO positions. The academic included college and graduate level teaching for about ten years. AB, MBA and PhD degrees from Duke University, the University of Chicago and Syracuse University in finance and economics provided the necessary "union credentials."

A love of country and concern for its future prompted the website Monty Pelerin's World. It deals with Economic, Political and Financial topics. As I write this, there are approximately 4,200 posts on this active website.

My writing reflects concerns about this country's future. Three common threads should be obvious:

The Chinese curse of "interesting times" is upon us. What is happening, and likely to continue, will be looked at by future historians as seminal in terms of its influence on us and the rest of the world. "What were they thinking?" is apt to dominate their analysis.

Readers are encouraged to offer suggestions or criticisms by contacting me through Leanpub or the website linked above.