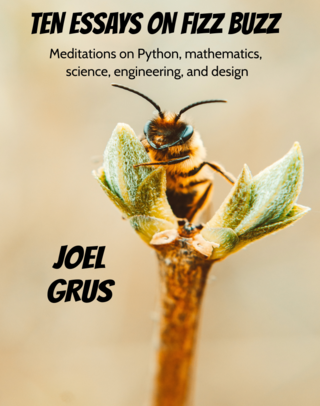 Over the years I have invented and/or collected various clever and/or stupid ways of solving Fizz Buzz. In this book are ten solutions I found particularly interesting, each one the inspiration for a discussion of different aspects of coding, Python, testing, Fizz Buzz, mathematics, software design, technical interviewing, and related topics.

"I'd never have thought a book about Fizz Buzz would make me a better programmer, but I was wrong. Joel in the course of 10 chapters does a broad survey of core Python concepts, software design and testing, mathematics, and more (including deep learning) using Fizz Buzz as the guiding example. It's that rare technical book that remains engaging, entertaining, and accessible." -- Binal Patel (@binalkp91)

More real Python tips than any "Python tricks" book! From a Python beginner to an experienced ML practitioner, you're bound to learn something about the language and its application to a progressive level of algorithmic applications. Recommended for the anyone looking to "level up" their Python or problem solving skills! -- Tom Marthaler (@tmarthal)

It originated as a children's game, but has since taken on a new life as a lowest-common-denominator litmus test for assessing computer programmers.

If you are an experienced programmer, it is an extremely easy problem to solve. Because of this, it has taken on a third life as the prototypical bad interview problem. Everyone knows that it's the question you ask people to make sure that they're not completely incompetent as programmers. Accordingly, if your interviewer asks you to solve it, he's suggesting he thinks it possible that you're completely incompetent as a programmer. You would not be wrong to feel insulted!

My association with this problem began in 2016, when I wrote a blog post called Fizz Buzz in Tensorflow, the (possibly fictional) story of one such insulted programmer who decided to show up his interviewer by approaching Fizz Buzz as a deep learning problem. This post went modestly viral, and ever since then I have been seen as a thought leader in the Fizz Buzz space.

Accordingly, over the years I have come up with and/or collected various other stupid and/or clever ways of solving Fizz Buzz. I have not blogged about them, as I am not the sort of person who beats a joke to death, but occasionally I will tweet about them, and recently in response someone suggested that I write a book on "100 Ways of Writing Fizz Buzz in Python."

Now, I could probably come up with 100 ways of solving Fizz Buzz, but most of them would not be very interesting. Luckily for you, I was able to come up with 10 that are interesting in various ways, each of which turned out to be a good launching-off point for (sometimes meandering) discussions of various aspects of coding, Python, Fizz Buzz, mathematics, software design, technical interviewing, and various other topics.

In many ways this is a strange book. Its goal is not to teach you a specific field or a specific technology. I hope you will learn a lot from reading it, but it's not really a book that you'd read in order to learn anything in particular. Most technical books are about specific technical topics; this one sort of isn't.

Nonetheless, it is a technical book. Each essay contains code that implements a different solution of Fizz Buzz. Each essay uses code to illustrate its ideas. Each essay represents my current best thinking about how to solve problems using code. If you have a coding job, you should feel no reluctance to expense this book to your employer.

As I primarily code in Python, all of these solutions will be in Python. Some of them will use features that were only introduced in Python 3.6, and some of them will demonstrate concepts and techniques that are mostly specific to Python. On some level this is deeply a Python book. However, my goal was to write a book that would be interesting and enlightening even if you are not a Python programmer. I'll leave it to you to judge how successful I was.

Joel Grus is the creator of the beloved book Data Science from Scratch, the beloved blog post Fizz Buzz in Tensorflow, and the polarizing JuypterCon presentation I Don't Like Notebooks.

He's also the co-host of the Adversarial Learning podcast.

An Interview with Joel Grus