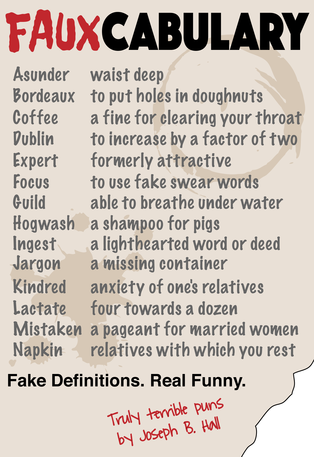 Fauxcabulary.org was created to provide some insight into how my mind works. I know it sounds strange, but as folks talk (in person, on the phone, on radio, on TV, …) my thoughts process each of their words, along with every word combo with similar sounds, meaning, or spelling.

The people that live and work with me daily get to hear about 20% of those stray thoughts in the form of oft-risqué puns (although I’m sure it feels more like 90% to them).

In 2009, my wife told me to start writing my stupid puns down, and since I’m not good at following directions, I started my faux-cabulary list instead.

Peppered within the site, you’ll also find some random musings that aren’t directly related to the whole fauxcabulary theme, but do fit nicely with the stated goal of “provid[ing] some insight into how my mind works”.

I hope you enjoy this collection. New fauxcabulary words are posted on the website every day at midnight. The other content is added as it happens. So keep checking back.

Joseph B. Hall has been a professional software developer for more than 30 years. He worked as a programmer for IBM and Microsoft. He was the software architect for a Fortune 500 bank, the CTO for an online ticket sales and servicing company, and started his own consulting company in 2006. These days, Joe is stretching his Agile / TDD muscles with ThoughtWorks in Atlanta, Georgia.

Joe lives with his wife of 30 years and his three daughters in Newnan, Georgia. Every summer, he teaches high school students how to write games during an intense weeklong course in North Carolina for Landry Academy. In his free time, Joe dabbles in sketching, cartooning, and creating 3D models. When you see his artistic creations, you'll understand why he makes his living as a programmer.