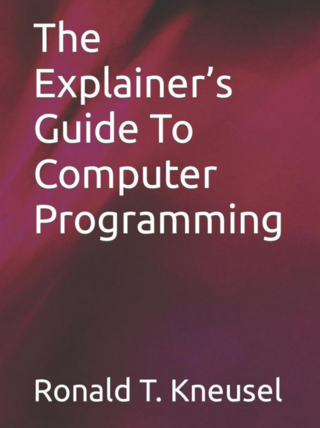 The Explainer's Guide to Computer Programming

The Explainer's Guide to Computer Programming

This book is for everyone who wants to learn more about what goes on under the computer’s hood and how to harness that power for your own purposes. If you are curious about how computers are controlled, this book is for you. All you need to bring to the table is your curiosity. Python will help you do the rest.

We may be aware that computers are general-purpose machines, that they can be instructed to act in different ways. The same general computer architecture, for example, controls your television, microwave, and car. What’s different between these examples, at a superficial level, is the program, the set of instructions telling the computer how to interact with its environment.

Therefore, computer programming, the act of instructing a computer to perform a task, is the key that makes computers useful. Change the instructions while keeping the machine the same, and you go from a web browser to a word processor to a video game.

This book is for everyone who wants to learn more about what goes on under the computer’s hood and how to harness that power for your own purposes. If you are curious about how computers are controlled, this book is for you. All you need to bring to the table is your curiosity.

This book introduces the core concepts behind computer programming. By the end of the book, you’ll know the following:

The Explainer’s Guides introduce readers to the fundamentals of each topic. No prior knowledge is assumed. The books are written by knowledgeable people and are intended primarily for adults seeking an introduction to the topic. The books are self-contained, and each book concludes by pointing the reader to additional material.

My infatuation with computers began in 1981 with an Apple II. I've been active in machine learning since 2003, and deep learning since before AlexNet was a thing.

My background includes a Ph.D. in computer science from the University of Colorado, Boulder (deep learning), and an M.S. in physics from Michigan State University. By day, I work in industry building deep learning systems. By night, I type away on my keyboard generating books.

Please see my full list of books at www.rkneusel.com.