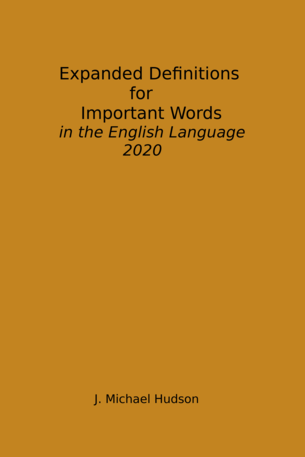 Should the word "Intelligence" replace the word "Spy"? Do you really think there is a "Blue Church"? Do you enjoy it when the word "Bitch" is thrown into every other sentence? Have you noticed the meaning of some of your favorite words slowly changing, perhaps even degenerating? If so, read this book.

Expanded Definitions for Important Words is an irreverent concordance of contemporary English designed to frustrate the extensive work of propagandists to make it impossible for various factions and subcultures to communicate with one another within Western Civilization, which has gradually adopted English as an ipso facto lingua franca between many various nationalities and ethnicities which share a desire for a continuation of the enlightenment and evolution towards values of open culture, freedom of speech, and governance based upon the self-evident protected rights of every minority and individual, as well as the permanent battle to restrain centralized authority and occult influence within our faltering attempt at civilization in the early 21st Century.

J. Michael Hudson is an interdisciplinary writer, comedian, musician and technologist. He grew up in St. Louis, Missouri and graduated from the University of Missouri in 2001 with a bachelor of arts in Interdisciplinary Studies focusing in Electrical Engineering, Computer Science and Mathematics. J. has worked for 2 decades as a technician and system administrator fixing and improving the internet, while developing his other career as a writer, musician and comedian. He has written numerous plays, screenplays, essays, songs, and tirades against the broken systems we have no choice but to inhabit. He is a victim of extensive harassment by the United States police state and has dedicated his work to fighting back against the shadowy forces that are undermining the stated values of western civilization, such as the the principle of a set of shared human rights for every human being, freedom of expression, limited government and the public's interest in non-predatory technology. He believes in forms of interaction that are symbiotic and harmonic over those that are predatory, parasitic, and exceptionalist. He is a skilled drummer, guitarist and songwriter. He is not a specialist, he is a system thinker with deep American values starkly in conflict with the current disastrous regime, and has spoken and written at length in defense of the values that once gave our planet hope of a bright future, but which are now called into question by factions who can only be described as traitorous fools and their depraved totalitarian puppeteers. You can find more of his work and read about his "path less travelled" life at JMichaelHudson.net.