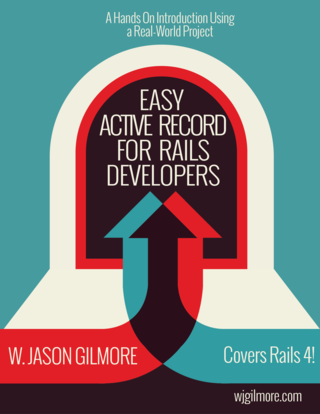 Master Rails Active Record and Have a Blast Doing It!

Easy Active Record for Rails Developers is the ultimate guide to mastering building database-driven Rails applications using the powerful Active Record ORM Framework. By loosely following along with the development of a fun, web application for retro arcade aficionados, you’ll learn how to:

In this opening chapter we'll get acquainted with many of the fundamental Active Record features you'll use throughout your project's lifetime. You'll learn how to create the models used to manage the application's business logic and provide convenient interfaces to the underlying database. You'll also learn how to use a great feature called *migrations* to create and evolve your database schema. The chapter concludes with a section explaining how to begin testing your models with RSpec and factory_girl

In this chapter you'll learn how to easily load, or *seed*, your application with an initial data set, as well as create and manipulate data. Of course, because we'll want to eliminate all possibilities of incomplete or invalid data from being persisted to the database, you'll also learn how to enhance your application models using a variety of *validators*. Additionally, we'll build on the introductory model testing material presented in the previous chapter. Notably, you'll learn how to create tests for ensuring you've properly fortified your models with enough validators to ensure unwanted data can't slip through the cracks.

In Chapter 2 you learned how to load seed data and create records, now it's time to begin querying that data! In this chapter I'll introduce you to Active Record's array of extraordinarily powerful query features. By the conclusion of this chapter you'll know how to efficiently query for all records, retrieve a specific record according to primary key, select only desired columns, order, group and limit results, retrieve random records, and paginate results. You'll also learn how to integrate these queries with the application controller and view to create listing and detail pages. Always striving towards writing readable code, we'll also enhance the models using a fantastic feature known as a *scope*.

Building and navigating table relations is an standard part of the development process even when working on the most unambitious of projects, yet this task is often painful when working with many web frameworks. Not so with Rails. Thanks to a fantastic feature known as *Active Record Associations*, defining and traversing these associations is a fairly trivial matter. In this chapter I'll show you how to define, manage, and interact with the `belongs_to`, `has_one`, `has_many`, `has_many :through`, and the `has_and_belongs_to_many` associations.

Your application's web forms will preferably interact with the models, meaning you'll require a solid grasp on Rails' form generation and processing capabilities in order to integrate with your models in the most efficient way possible. While creating simple forms is fairly straightforward, things can complicated fast when implementing more ambitious solutions such as forms involving multiple models. In this chapter I'll go into extensive detail regarding how you can integrate forms into your Rails applications, covering both Rails' native form building solutions as well as several approaches offered by popular gems.

Chapter 6. Debugging and Optimizing Your Application

While it's fun to brag about all of your project's gloriously cool features, they came at great expense of your time and brainpower. Much of the effort was likely grunt work, spent figuring out problems such as why a query was running particularly slow or the reason a complex association wasn't working as expected. This important but decidedly unglamourous part of programming is something I try to minimize on every occasion by relying on a number of tools and techniques that can automate much of the analysis and debugging process. In this chapter I'll introduce you to several of my favorite solutions for debugging and optimizing Rails applications.

Offering users the opportunity to create an account opens up a whole new world of possibilities in terms of enhanced interactivity and the opportunity to create and view custom content. Yet there are quite a few moving parts associated with integrating even basic account features, including account registration, secure password storage, sign in, sign out and password recovery interfaces, and access restriction. Fortunately the fantastic Devise gem greatly reduces the amount of work otherwise required to implement account creation, authorization and management features, and in this chapter I’ll introduce you to many of the wonderful features this gem has to offer.

Ruby on Rails is such a powerful solution thanks in large part to its enormous ecosystem. You're probably familiar with prominent gems such as Devise, RSpec, and FriendlyId, but there are also much more focused gems capable of extending specific parts of Rails, including templating (such as Redcarpet) and e-mail (see the popular Mail gem). So too can you extend Active Record in a variety of interesting and useful ways, and in this chapter I'll introduce you to a few of my favorite gems, including Acts As Taggable On, Decent Exposure, and Geocoder.

W. Jason Gilmore (http://www.wjgilmore.com) is a Columbus, Ohio-based software developer, writer and consultant. He has spent much of the past 15 years helping companies of all sizes build amazing solutions. Recent projects include a Rails-driven e-commerce analytics application for a globally recognized publisher, a Linux-powered autonomous environmental monitoring buoy, and a 10,000+ product online store.

Jason is the author of seven books, including the bestselling "Beginning PHP and MySQL, Fourth Edition", "Easy PHP Websites with the Zend Framework, Second Edition", and "Easy Active Record for Rails Developers". Over the years Jason has published more than 300 articles within popular publications such as Developer.com, JSMag, and Linux Magazine, and instructed hundreds of students in the United States and Europe.

Jason is cofounder of the wildly popular CodeMash Conference, the largest multi-day developer event in the Midwest. Away from the keyboard, you’ll often find Jason hunched over a chess board or having fun with DIY electronics.

An Interview with W. Jason Gilmore

This package includes the book in addition to *all* of the source code and sample data used to power the ArcadeNomad demo project.

This package includes the book, and of course all updates are free to existing readers forever!