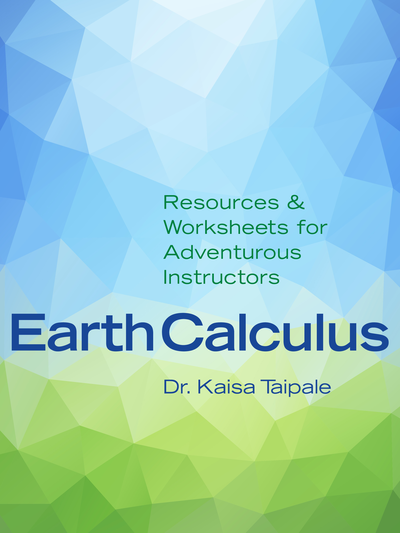 Resources and Worksheets for Adventurous Instructors

Kaisa Taipale
Bring the natural world into your calculus class: get inspired with project ideas or bring worksheets to class today! Every day we hear news about our water, air, and natural resources -- but where does that show up in math class? Get students to interact with messy data from the natural world.
Table of Contents

I am a mathematician who loves contemplating the purest of the pure (string theory is so cool!) and the messiest of the messy (what's the mathematics of composting?). Contemplation is not enough, though. I like to make stuff! Hence the book.

EarthCalculus is a book about the calculus on Planet Earth, beyond gravitation. My students are interested in the environment, nature, the planet, and our interactions with it -- and calculus has tools to deal with the messy problems of groundwater usage, optimization of fertilizer use, and many other surprisingly subtle problems. It's so much more fun to demonstrate the open-ended powers and pitfalls of mathematics than just do problems from standard texts. EarthCalculus aims to give profs and students quick introductions to those interesting real-life problems, with dozens of in-class worksheets to get students' hands messy.