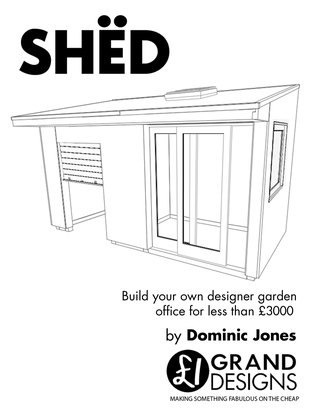 SHËD: Build your own designer garden office for less than £3000

SHËD: Build your own designer garden office for less than £3000

The book of the "OneGrandDesigns.com" shed: winner, Garden Office Category, Shed of the Year 2010

Dominic Jones
In 2009 I built a garden office in my back yard. The design won runner up in the coveted "Shed of the year" competition. This fully illustrated book walks you through the construction of my shed, showing how a relatively confident DIYer can build their own. If you can use a circular saw, swing a hammer and don't mind a bit of graft you can save yourself thousands!
Table of Contents

I'd been threatening to write this book for years. When I built my garden office in 2009, I blogged about it at onegranddesigns.com. Inspired by the beautiful but shockingly expensive garden offices shown in a Guardian article, I resolved to produce my own "Grand Design" on a budget of just £1000.

Whilst I failed to hit my budget in true "Grand Designs" style, the design went on to win the garden office category in the hotly contested "Shed of the Year" competition in 2010, and people started asking me whether I could write a set of plans so they could build their own. Three years later, this book was their answer. Now in its third and final edition (published July 2015), the book has benefitted from 4 years worth of feedback from builders and readers so hopefully is as good as I can make it. It offers a simple, straightforward "how to" to build the same shed I built.

DOMINIC JONES Is a self confessed “Sheddie”. By day a mild mannered council worker unhampered by any skill for or knowledge of building, Dominic embarked on the production of his own DIY Garden Office in the small back yard of a terraced house in South Liverpool in April of 2009. The garden office went on to win the garden office section of the prestigious "Shed of the Year" competition 2010, briefly garnering Dominic the dubious title of “Liverpool’s Mr Shed”.

He is still occasionally called up by his local radio station to talk on the subject of sheds and shed working.

He's recently moved house, away from the house where he built his  shed into the middle class ghetto. He can mostly be found staring at a corner of his new garden, wielding a tape measure and a steely glint in his eye.